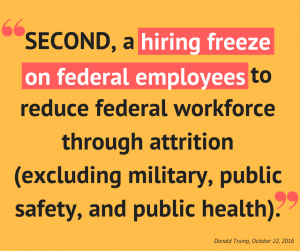 Note that the US Postal Service is not one of the exceptions. USPS operations are not paid for with taxpayer dollars, so a postal hiring freeze wouldn’t do anything directly to help the federal budget.

On its Facebook page, the National Association of Letter Carriers points out that “The second item in Donald Trump’s 100-day “Contract with the American Voter” could leave more than 15,000 letter carrier jobs vacant each year and prevent city carrier assistants (CCAs) from being converted to full-time career employees.”

Obviously, the Trump proposal would have similar implications for other employee groups within the USPS.