10/21/2016 – Fifteen years after their deaths from exposure to anthrax-laden mail, Joseph P. Curseen Jr. and Thomas L. Morris Jr. were remembered by their co-workers at a reflective and joyful ceremony on Oct. 21.

A monument to the two APWU members was unveiled at the memorial outside the mail processing center that was renamed in their honor. More than 100 USPS employees and managers attended, as well as Curseen’s sister and brother-in-law.

Morris, 55, a 28-year USPS employee, died Oct. 21, 2001. Curseen, 47, a 15-year employee, succumbed a day later. They died of respiratory ailments after they came in contact with letters bound for Capitol Hill that contained the deadly toxin. 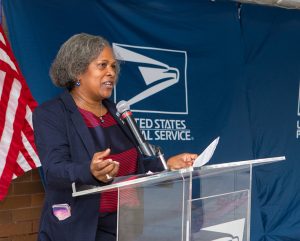 Dena Briscoe, speaking at the memorial.

Speaking at the Oct. 21 ceremony, Dena Briscoe, president of National Capital/Southern MD Local APWU, said, “Many workers’ lives were shattered” by the terrible events a decade-and-a-half ago. “We all have a story,” she said, recalling the fear and grief that gripped the nation after the incident, which closely followed the terrorist attacks of 9/11.

Despite the danger, postal workers continued to perform their duties, Briscoe noted. The Brentwood Road mail processing center was closed for decontamination until December 2003, workers were reassigned to other facilities, and although some workers elected not to return to the renamed mail processing center, most “bravely walked together back into the building.” Today, workers are “somewhat calmed” by the safety and security measures that were put in place following the attacks, she said.

Throughout the crisis, however, there were bitter battles between the postal unions and management. Anthrax contamination was not limited to the mail processing center in Washington; the Hamilton Township, NJ, facility was also contaminated, and traces of the deadly powder were found at mail processing centers in Wallingford, CT, and New York City.

The APWU had helped ensure that the Washington and NJ facilities would be closed for decontamination, but the Postal Service refused to close the Wallingford and New York facilities, prompting APWU President William Burrus to say in November 2001, “Despite our commitment to serving the public, we should not be expected to put our lives at risk in a facility that is known to be contaminated.”

Briscoe was instrumental in forming Brentwood Exposed, a group that advocated on behalf of the workers at the Brentwood facility. 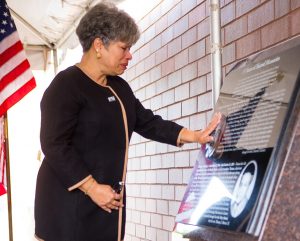 Joan Jackson, sister of Joseph Curseen, is moved as she admires the monument. It is flanked by benches with the names inscribed.

“We all became more alert and protective of each other,” she added, “and looked forward to a brighter future.” Looking ahead to the 20thanniversary of anthrax attacks in 2021, she said she hoped the men, affectionately known as “Joe and Mo,” would be honored with a U.S. Postal Service stamp.

There were 18 confirmed anthrax cases in late 2001, including three other known fatalities. The first fatality was a photo editor at a weekly newspaper in Boca Raton, where anthrax-laced mail was received. The last was a 94-year-old Connecticut woman who died of inhalation anthrax on Nov. 21; her mail was processed at a P&DC in Wallingford, CT. A postal connection to the Oct. 31 anthrax-related death of a 61-year-old healthcare worker from the Bronx was never confirmed.

Others were severely stricken, including three postal workers who fought for their lives: Leroy Richmond, who worked with Curseen and Morris, and Norma Wallace and Jyotsna Patel, who worked at the New Jersey P&DC. Letters to lawmakers in Washington, NBC News in New York City, and the New York Post had been processed at the Hamilton Township facility near Trenton. Several postal workers in New Jersey were exposed to the bacteria contracted “skin anthrax,” which is rarely fatal.

Click here to read more about the anthrax attacks and the union’s fight to protect the lives of postal workers.