WASHINGTON — The U.S. Postal Service dedicated a Christmas stamp today featuring the Florentine Madonna and Child, from a 15th-century tempera-on-panel painting in the Widener Collection at the National Gallery of Art in Washington, DC. The ceremony took place at the Smithsonian National Postal Museum.

The painting is dated to circa 1470, and its anonymous artist is known only as “a Follower of Fra Filippo Lippi and Pesellino.” The public is invited to share the news using the hashtag #ChristmasStamps.

“With the holidays right around the corner, this stamp, based on a beautiful portrait as part of the National Gallery of Art’s collection, is perfect for extending Christmas greetings to family, friends and loved ones,” said U.S. Postal Service Capital Metro Area Vice President of Operations Linda Malone. 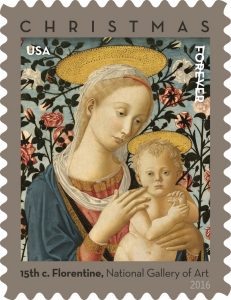 “The Florentine Madonna and Child represents not only the Italian Renaissance, but also the importance of the arts in all of western civilization,” said Fisher. “This emphasis was later brought to the United States by many immigrant groups — including Italians — each in their own way.”

Art historians have long sought to identify the artist who created this painting. Early in the 20th century, the painting was attributed to the Florentine artist Pier Francesco Fiorentino, but not long after, the painting was seen as the work of an anonymous artist who had created a large number of paintings in the same style.

Although some museums still refer to the artist as “Pseudo-Pier Francesco Fiorentino,” scholars have recently taken a different approach and concluded that the artist was heavily influenced by two prominent 15th-century Florentine artists, Fra Filippo Lippi and Francesco Pesellino. The painting on this stamp is believed to be based on a Pesellino painting, now in the Musée des Beaux-Arts de Lyon in France, which shows a very similar Madonna and Child against a different background. For that reason, the National Gallery of Art refers to the artist as “a Follower of Fra Filippo Lippi and Pesellino.”

Clad with a white veil over her head and a red garment and blue cloak, both trimmed in gold, a haloed Virgin Mary gazes downward and to the right, looking at a blond, haloed Christ child while placing her right hand on his shoulder. The Christ child looks directly at the viewer. The position of the thumb and forefinger of his left hand suggests to some art historians that the painter may have intended to show him holding a symbolic object, although the painting in France believed to be its source shows the Christ child making the same gesture.

Behind both of them is a hedge of pink and white roses, with blue sky visible through thorny, leafy stalks.

Similar paintings, presumably by the same artist or workshop, are in the collections of many museums in other cities, including Baltimore, Philadelphia and London. Art historians have speculated that the painter may have had preparatory drawings or close copies of the works of the masters he imitated, and that a relationship may have existed between the workshops of those artists and this anonymous painter.

The Postal Service is issuing this stamp as a Forever stamp in a booklet of 20. Forever stamps are always equal in value to the current First-Class Mail 1-ounce price.

When referring to the Madonna and Child painting, use the following credit line: “National Gallery of Art, Widener Collection.”

Ordering First-Day-of-Issue Postmarks
Customers have 60 days to obtain the first-day-of-issue postmark by mail. They may purchase new stamps at local Post Offices, at The Postal Store website at usps.com⁄shop, or by calling 800-782-6724. They should affix the stamps to envelopes of their choice, address the envelopes to themselves or others, and place them in a larger envelope addressed to:

The Postal Service will apply the first-day-of-issue postmark and return the envelopes through the mail. There is no charge for the postmark up to a quantity of 50. There is a 5-cent charge for each additional postmark over 50. All orders must be postmarked by Dec. 18, 2016.

Ordering First-Day Covers
The Postal Service also offers first-day covers for new stamp issues and Postal Service stationery items postmarked with the official first-day-of-issue cancellation. Each item has an individual catalog number and is offered in the quarterly  USA Philatelic catalog, online at usps.com⁄shop, or by calling 800-782-6724. Customers may request a free catalog by calling 800-782-6724 or writing to: