WASHINGTON — According to a new survey, more than half of swing voters responding (58 percent) said direct mail is either “very helpful” or “somewhat helpful” in deciding how and whom to vote for, beating out television (55 percent), online (48 percent) and email (46 percent). Approximately one of three registered voters surveyed identified as a swing voter. Among those surveyed, 14 percent said they were “undecided,” and 18 percent said they “might change their minds.” 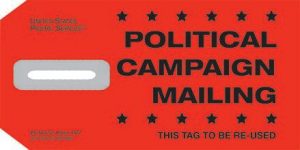 “When political races are tight, campaigns need to know what influences swing voters,” said Cliff Rucker, vice president of Sales for the United States Postal Service. “Political mail spending has increased nationally by 50 percent since the last presidential election. As campaigns use more mail, it’s all the more reason to explore mail’s impact.”

Additional key survey findings among all “likely” voters were:

On behalf of the Postal Service, Summit Research conducted the online survey (August 11–22, 2016) among a national sample of 1,398 adults. Data are weighted to census-level targets for gender, region, race, age, education and income. The full survey sample also includes an oversample of millennials (n=699) that were weighted to census-level targets for gender, age, race, education/gender and marital status. Additional questions were used to screen for registered, likely and swing voters.