Starting in 2018 bulky letters and small packets, classified as E-format, will be compensated differently from other letter-post formats. With increased volume of small packets being exchanged through the letter-post networks due to e-commerce, UPU member countries have been seeking a new rate structure of compensation for handling of higher volumes of heavier items.

Somasundram noted that experts have been working on developing a better system of remuneration since the last Universal Postal Congress in Doha in 2012. The proposal adopted last week was the result of much study and consultation with countries at various levels of development in each of the world’s regions.

“[The adopted terminal dues package] recognizes that member countries have as a whole agreed on three main principles,” said Somasundram.

“One, having all countries get to the target system; secondly, that costs coverage is important; and thirdly, that the remuneration system that the UPU agrees on doesn’t negatively impact the way in which customers respond to the associated services,” he said.

The terminal dues system was established by the 1969 Tokyo Congress as a means to compensate destination countries for the cost of handling, transporting and delivering letter-post items across borders. 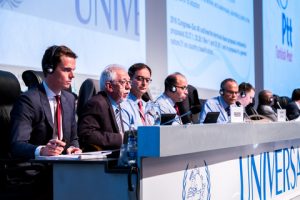 The classification system was established at the 2008 Universal Postal Congress in Geneva and updated by the 2012 Doha Congress.

Starting in 2018, former Group 1.2 and Group 2 will be merged in the new Group II, while Groups 4 and 5 will make up the new Group IV. The goal is to eventually move all countries into a single target terminal dues system.

Thanks to an earlier decision made by Committee 6, which oversees proposals for development cooperation, a further one per cent mark up to terminal dues will be paid by countries in the target system into a new Common Fund of the QSF. The Fund will finance development projects in countries in groups II, III, and IV.