TORONTO – On the eve of the World Cup of Hockey 2016 semi-finals, and less than three weeks before the start of the 2016-17 NHL® Season, Canada Post unveiled the fourth issue in its five-year NHL stamp series. 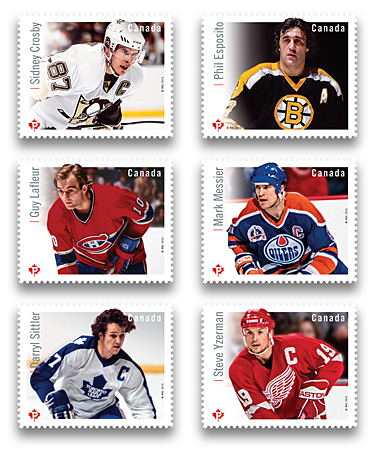 “This talented group of star forwards has contributed to our national story beyond the goals they’ve scored and the trophies they’ve won,” says Canada Post President and CEO Deepak Chopra. “They are heroes for what they stand for. They are men of honour and character and represent the best of who we are as Canadians.”

The six legends hail from five provinces. As a group, they played in more than 8,300 NHL games and scored more than 3,800 goals and more than 5,700 assists – more than a point per game (regular season and playoffs). Between them, they have won 18 Stanley Cup® Championships.

“This year’s collection represents a special group of players; each one a marquee player whose impact was felt by those on the ice, behind the bench, in the stands, and at home,” says NHL Deputy Commissioner Bill Daly. “The NHL is proud to congratulate this year’s elite class of honourees.”

All players participated in the unveiling ceremony in the Esso Great Hall, home of the Stanley Cup®. The lineup (click here for stamp images): 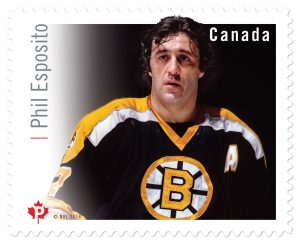 Phil Esposito played for the Chicago Blackhawks, Boston Bruins and New York Rangers, scoring 1,590 points in 1,282 regular-season games over an 18-season NHL career. Esposito helped lead the Bruins to two Stanley Cup® Championships (1970 and 1972) and Team Canada to victory in the 1972 Summit Series. A 10-time All-Star, Esposito was inducted into the Hockey Hall of Fame in 1984 and Canada’s Sports Hall of Fame in 1989. The Bruins retired his No. 7 jersey in 1987.

Guy Lafleur played for the Montreal Canadiens, New York Rangers and Quebec Nordiques, scoring 560 goals and 793 assists for a total of 1,353 regular-season points over a 17-season NHL career. He reached a milestone 1,000 points in just 720 games, faster than any other NHL player before him. He won five Stanley Cup® Championships as a player with the Canadiens and was inducted into the Hockey Hall of Fame in 1988 and the Canadian Sports Hall of Fame in 1996. The Canadiens retired his No. 10 in 1985.

Darryl Sittler played for the Toronto Maple Leafs, Philadelphia Flyers and Detroit Red Wings, scoring 484 goals and 637 assists for 1,121 regular season points over his 15-season NHL career. He became the first Leaf to score 100 points in a season and also made history by scoring 10 points in a game against the Bruins on February 7, 1976, an NHL record that still stands. He was inducted into the Hockey Hall of Fame in 1989. The Leafs honoured his No. 27 jersey on February 8, 2003, 27 years plus a day after his historic scoring feat against the Bruins.

Mark Messier played 25 seasons in the NHL for the Edmonton Oilers, New York Rangers and Vancouver Canucks. He is one of the game’s highest scorers, ranking second among all-time points leaders with 1,887. He scored 694 goals and 1,193 assists in 1,756 regular-season games and holds the record for most NHL games played, including playoffs – 1,992. He won five Stanley Cup® Championships with the Oilers and another with the Rangers. A 15-time All-Star, Messier is the only player to captain two different franchises to Stanley Cup® titles. The Rangers retired his No. 11 in 2006 and the Oilers in 2007. Messier was inducted into the Hockey Hall of Fame in 2007 and Canada’s Sports Hall of Fame in 2009.

Sidney Crosby has played his entire NHL career to date with the reigning Stanley Cup® Champion Pittsburgh Penguins. Drafted first overall in 2005, at age 18 he became the youngest NHL player to notch more than 100 points. Named captain two years after entering the NHL, he was the youngest captain ever to win the Stanley Cup® championship in 2009 at age 21. He won the Stanley Cup® Championship a second time last spring. He has played 707 regular-season games to date, scoring 338 goals and 600 assists for 938 points. He is also a two-time Olympic gold medal winner (2010 and 2014) and captured gold with Team Canada at the 2015 International Ice Hockey Federation (IIHF) World Championship.

The 2016 NHL® Great Canadian Forwards series is the fourth of a five-year collection of NHL stamps leading up to the NHL’s 100th anniversary in 2017. The issue builds on the NHL Team Jersey stamps released in 2013, the Original Six™ Defenceman stamps released in 2014 and the NHL® Great Canadian Goalies stamps last year. The series and all related products are available online at canadapost.ca/NHL.

About the NHL Great Canadian Forwards stamps
Available in a mixed booklet of six, containing all of this year’s lineup, the stamps measure 40 mm x 32 mm with simulated perforations, and are printed by Lowe-Martin on Tullis Russell paper with seven-colour lithography. The booklet front features a tightly cropped action shot of Lafleur and Sittler. Oversized-rate hockey-card-size souvenir sheets are available in a pack of six, as well. Each includes a chance to win: one in 40 packs has a signed and authenticated souvenir sheet. Related products: A gummed mini-pane collectors’ item featuring all six players. The mini-pane features embossed, foiled logos of the team each player was best known for. The Official First Day Covers – one for each player – will be cancelled in the birthplaces of the player: Sault Ste. Marie, Ont. (Esposito); Thurso, Que. (Lafleur); Kitchener, Ont. (Sittler); Edmonton, Alta. (Messier); Cranbrook, B.C. (Yzerman); and Cole Harbour, N.S. (Crosby). Limited edition signed and numbered framed prints are available for each player.