In 2016, the Postal Service celebrates the television show Star Trek on the 50th anniversary of its premiere. Four new stamps showcase four digital illustrations inspired by elements of the classic program: the Starship Enterprise inside the outline of a Starfleet insignia against a gold background, the silhouette of a crewman in a transporter against a red background, the silhouette of the Enterprise from above against a green background, and the Enterprise inside the outline of the Vulcan salute (Spock’s iconic hand gesture) against a blue background. 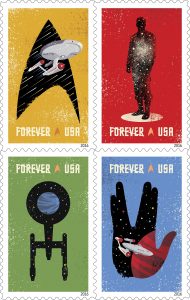 The words “SPACE…THE FINAL FRONTIER,” from Captain Kirk’s famous voice-over, appear beneath the stamps against a background of stars. The Heads of State designed the stamps and created the artwork. Antonio Alcalá was the project’s art director.