A Florida man claims that a Donald Trump campaign ad he received in the mail had a message supporting Hillary Clinton scrawled across it:

Written across a mailer from the Donald Trump campaign was a message written in black ink that read “MAILMAN SAYS HILLARY 2016.” 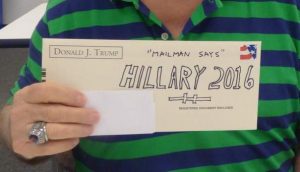 U.S. Postal Service spokeswoman Enola Rice said “The Postal Service is currently investigating the incident alleged to have occurred in Winter Haven, and will take appropriate action depending upon the results of the investigation,” she said.

White said earlier this year that a photo of Trump on another campaign mailing he received was defaced by someone who altered the image to make Trump appear like the devil, complete with horns that contained a message that read Trump will destroy the post office.