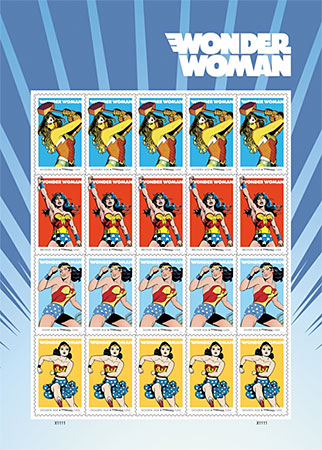 WASHINGTON — The U.S. Postal Service, in partnership with Warner Bros. Consumer Products and DC Entertainment, previewed four Forever stamps today that commemorate the 75th anniversary of one of the most iconic Super Heroes of all time — Wonder Woman. The stamp pane will be among other Wonder Woman related items revealed at 3 p.m., Sat., July 23 atComic-Con International: San Diego. The first-day-of-issue dedication ceremony will take place Oct. 7 at New York Comic-Con, Fri., Oct. 7.

Fans are encouraged to share the news on social media using the hashtags#WonderWomanForever and #WonderWoman75.

First seen in October 1941 in a back-up story for All Star Comics #8, meant to test her appeal at a time when female superheroes were rare, Wonder Woman quickly broke out and headlined her own title by the next year. Subsequent generations came to know the star-spangled heroine with metal bracelets on her wrists and a magic lasso by her waist via her hit 1975-79 television series and roles in animated shows and movies, as well as her historic appearance on the cover Ms. Magazine #1 in 1972. This past March, Wonder Woman was seen for the first time in a live action motion picture with her introduction in the movie “Batman v Superman: Dawn of Justice.” 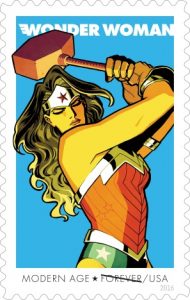 The U.S. Postal Service celebrates her diamond anniversary by chronicling her evolution on Forever stamps from her World War II origins to today. This new issuance showcases four different stamp designs on a sheet of 20 stamps depicting Wonder Woman during four eras of comic book history:  Golden Age (1941–55), Silver Age (1956–72), Bronze Age (1973–86) and Modern Age (1987–present). The selvage, or text outside of the stamp images, features the current block-letter Wonder Woman logo in white against a comic book style power burst rendered in shades of blue.

On the first row of stamps Wonder Woman of the Modern Age wields a hammer with a power and determination befitting her roots in the heroic world of Greek mythology. 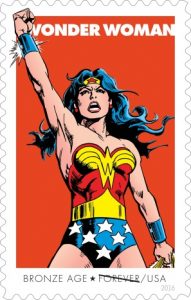 The Bronze Age Wonder Woman’s bold stance empowers the second row of stamps. With her fist held high and bulletproof bracelets gleaming, the Amazon princess leads the charge against injustice. 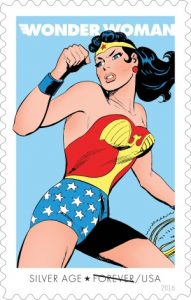 The third row of stamps depicts Wonder Woman during the Silver Age. Although she possesses great strength and speed, the world’s favorite superheroine prefers compassion to the use of brute force. With her golden lasso of truth close at hand, she compels honesty from her foes. 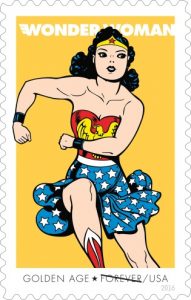 In the last row of stamps, Wonder Woman from the Golden Age bursts onto the scene as originally envisioned by creator William Moulton Marston.

Art director Greg Breeding of Charlottesville, VA, designed the stamp pane. The Wonder Woman stamps will be issued as Forever stamps and always be equal in value to the current First-Class Mail one-ounce price.

Not Her First “Stamping Ovation”
In 2006, Wonder Woman was part of the Postal Service’s first stamp pane honoring comic book superheroes. Half of the stamps on the DC Super Heroes pane depicted portraits of the characters; the others highlighted covers of individual comic books devoted to their exploits. Wonder Woman was joined by Aquaman, Batman, The Flash, Green Arrow, Green Lantern, Hawkman, Plastic Man, Supergirl and Superman. The first-day-of-issuance ceremony took place at Comic-Con in San Diego. 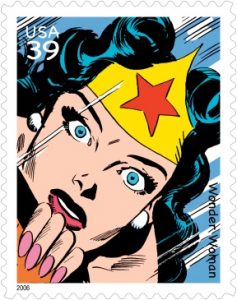 Wonder Woman
Art by Ross Andru & Mike Esposito
Wonder Woman has been an iconic inspiration for countless women and men since her debut inAll Star Comics #8 in December 1941. The most recognizable female character in comics, created by William Moulton Marston, she remains a figure of strength, beauty, and courage.

Wonder Woman #22 (2nd series)
Nov. 1988
Art by George Pérez
As a worldwide ambassador of justice, equality and peace, Wonder Woman soared to new heights in the late 1980s. The character returned to her roots as an Amazon warrior from Paradise Island, land of heroic women. Her special powers were gifts from the Olympians.

Visit this link for news on upcoming stamp events.

About DC Entertainment
DC Entertainment, home to iconic brands DC (Superman, Batman, Green Lantern, Wonder Woman, The Flash, etc.), Vertigo (Sandman, Fables, etc.) and MAD, is the creative division charged with strategically integrating across Warner Bros. and Time Warner.  DC Entertainment works in concert with many key Warner Bros. divisions to unleash its stories and characters across all media, including but not limited to film, television, consumer products, home entertainment, and interactive games.  Publishing thousands of comic books, graphic novels and magazines each year, DC Entertainment is one of the largest English-language publishers of comics in the world.