A special dedication ceremony also will be held July 16 at Garfield High School in Los Angeles, where Escalante taught. 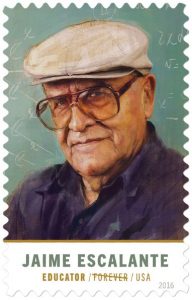 Digitally illustrated by Jason Seiler, the stamp art depicts Escalante in a style meant to resemble an oil painting. Escalante stands in front of a chalkboard on which calculus symbols are visible. He is wearing his signature flat cap, looking forward toward the viewer. The illustration is based on a photograph taken by Jaime Escalante II, on May 6, 2005, in the classroom at Hiram Johnson High School in Sacramento, CA, where his father formerly taught. Art Director Greg Breeding designed the stamp with original art by Seiler.

“We are here today to honor Jaime Escalante because, as a teacher, he proved time and time again with the right inputs into the right formula conventional wisdom could be defied,” said Robert Cintron, vice president, Network Operations, who dedicated the stamp.

“We celebrate Mr. Escalante today for his charmed ability to create calm within a landscape of calamity,” said Cintron. “As a result of staying committed to his belief that all students can learn, kids who had been written off as undisciplined, uninterested, unmanageable and unruly were given a real opportunity at learning. In return his students showed the world that one opportunity was really all that they needed.”

Fame came to Escalante in an unexpected — and unfortunate — way. In 1982, 18 of his students took the advanced placement calculus exam and passed. Controversy followed when the testing service accused 14 students of cheating. Escalante suspected that the accusation of cheating was due to the fact that the students were Mexican-Americans from a low-income area of Los Angeles. The testing service denied the allegation and proposed a solution: that the 14 students retake the test. Twelve of the 14 took a different exam from the first, and all passed.

Escalante and his students became instant heroes in the fall of 1982 when the story broke in the news media and attracted the attention of Hollywood producer Tom Musca and director Ramón Menéndez. The movie “Stand and Deliver,” released in 1988, garnered good reviews and made Escalante one of the most famous teachers in America.

In 1999, Escalante was inducted into the National Teachers Hall of Fame for his efforts to “have children believe in their ability to achieve.”

The Jaime Escalante Forever Stamp will always be equal in value to the current
First-Class Mail one-ounce price.

Customers may purchase the Jaime Escalante Forever Stamp at usps.com/stamps, at thePostal Store usps.com/shop, by calling 800-STAMP24 (800-782-6724) and at Post Office locations nationwide. A variety of stamps and collectibles also is available at ebay.com/stamps.

Ordering First-Day-of-Issue Postmark
Customers have 60 days to obtain first-day-of-issue postmarks by mail. They may purchase new stamps at local Post Office locations, at the Postal Store usps.com/shopor by calling 800-782-6724. They should affix the stamps to envelopes of their choice, address the envelopes to themselves or others and place them in envelopes addressed to:

After applying the first-day-of-issue postmark, the Postal Service will return the envelopes through the mail. There is no charge for postmarks up to a quantity of 50. For more than 50, customers are charged 5 cents each. All orders must be postmarked by Sept. 13, 2016.

Philatelic Products
There are seven philatelic products for this stamp issue: