“You get to know … when something looks out of place,” he says. 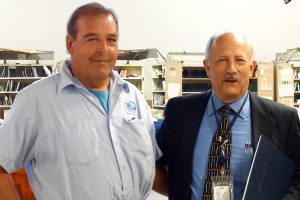 That instinct led Scive to act decisively when he recently saw a woman slumped over in her running car.

He asked a customer to approach the car with him, and they found the woman pale and unresponsive.

Scive turned off the car, called 911 and stayed on the scene until emergency personnel arrived.

They treated the woman, an overdose victim, and credited Scive with saving her life.