07/01/2016 – APWU members at the Metroplex Mail Processing and Distribution Center in suburban Detroit are taking a stand against an extremely hostile work environment.

“It starts and stops with a complete lack of respect on the workroom floor,” said Roscoe Woods, president of the 480-481 Area Local. “It is by far one of the worst work environments I have ever seen.”

Conditions have deteriorated over the past two years. Managers verbally berate employees, and routinely use profanity when addressing them. They often barge into the union office and treat stewards “like garbage,” Woods said.

Things got uglier after management set up a “Meet and Greet” area late last year, where managers speak with workers at the beginning of their tour to discuss goals and hold service talks. The Meet and Greet was supposed to foster better communication, but it did the exact opposite, Woods said. Managers use it as an opportunity to berate employees and call out individuals for alleged poor performance in front of their co-workers.

“It’s probably turned into the nastiest back-and-forth we have ever had,” Woods said.

He added that employees are often forced to work alone on sorting machines that normally require two people. When workers ask for a steward, they are denied representation.

“Management would berate those employees for not being productive, when they are basically running a 90,000 piece machine by themselves,” Woods pointed out, adding that operating a machine this way jeopardizes safety.

Management’s response to complaints about safety? Workers “are not working hard enough to be unsafe.”

Woods noted that Postal Support Employees (PSEs) and newly-converted full-time regulars are bearing the brunt of the abuse.

“They tell PSEs that they can get fired in a heartbeat,” Woods explained. “They don’t ask you to do anything, they just bark orders. If you question anything, they throw you out of the building.”

When PSEs attend union meetings, many ask that their names be left out of the meeting’s minutes for fear of retaliation.

“It’s a free-for-all around here and we are done with it,” Woods said.

Management’s worst offenders are protected and even promoted, he added. 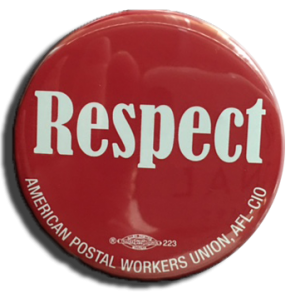 After filing multiple grievances and working his way up the ranks of management to the area vice president – with no results – Woods amped it up a notch.

The local reached out to Rep. Brenda Lawrence (D-MI), who attended a recent union meeting and heard workers’ concerns first-hand.

Woods also sent a “climate survey” to every member of the local. Within a week, the union received more than 175 responses – and they painted a “very dismal picture” of work at the facility.

Woods shared the results of the survey with the local TV station, which ran an exclusive story.  “The overwhelming majority call it a ‘toxic work environment’ – circling words like ‘hostile,’ ‘tense,’ and ‘difficult’ when answering questions,” the station reported.

The local also distributed buttons that say simply, “RESPECT,” which managers see throughout the day, beginning with the confrontational “Meet and Greets.”

The next step is taking the issue to the Postmaster General, Woods said.

“I am tired of people talking to me, I want people to do something,” he said. “They are trying to jam our stewards up. They are baiting us and they are going to great lengths.

“I am going to keep riding this until I run out of ideas,” he vowed. “I am not going to let this stand. It’s ridiculous.”

APWU President Mark Dimondstein commended union members. “Workers have a basic right to dignity and respect at work. We applaud Roscoe Woods and the workers of the 480-481 Local for standing up and fighting back.”