06/27/2016 –
Fed up with chronic understaffing of mail sorting machines, nearly 100 members of the Saint Louis Gateway Area Local and their allies formed an enthusiastic picket line outside the downtown post office on June 14.

Normal staffing on DBSC machines is two workers: a feeder and a sweeper. But for close to two years, that’s been a rare exception, reports Local President Fred Wolfmeyer.

“We have a lot of clerks on each tour who are working by themselves on the machines,” he said. “They are working 8-hour days without a partner.”

Workers’ safety is in jeopardy and service to customers is suffering as a result, Wolfmeyer said.

When workers stop the machines to sweep the mail, managers complain that their throughput isn’t high enough, he reports.

In many cases, newer workers, especially Postal Support Employees, “are afraid they will lose their job,” and rush from one end of the machine to the other, trying to keep the numbers up. 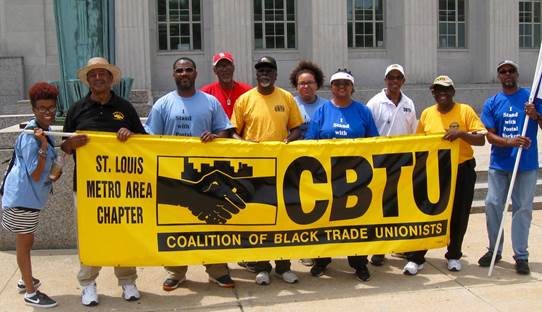 “That’s even more dangerous,” Wolfmeyer said, noting that no work-measurement system or quota is in place.

The union brought the issue to management’s attention when the practice began, but has received “nothing but lip service,” the local president said. “I got tired of it. The members got tired of it and decided to take action.”

‘Out to the Streets’

Action came in the form of the June 14 rally. Members of the local started organizing in April, by word of mouth at work, passing out flyers, and posting on Facebook.  The local also reached out to the Saint Louis Local Labor Council and Jobs with Justice. 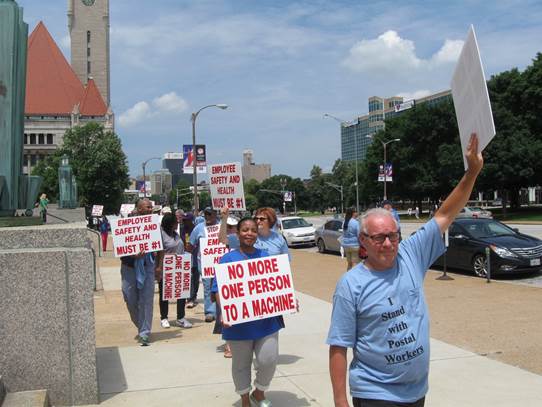 The protest received media attention, “Let’s take it out to the streets, put it out there for everyone to see,” Wolfmeyer said, noting that members were “thrilled” with the rally results. “They were really happy. They felt like the union backed them up and really stood with them on this issue.”

Next on deck is a postcard campaign. Members will sign postcards, which they plan to send to the homes of the plant manager, district manager and lead manager of distribution operations.

“We have to do something. We have to get them to move,” Wolfmeyer said.

APWU President Mark Dimondstein praised the local for taking a public stand. “I often say that we have to do more than just file grievances – there are others ways to solve our problems,” he said. “This is a good example of how to take a workplace issue to the public. Actions like this empower union members.”