Buzzfeed reports that the US Postal Service is investigating a person claiming to be a letter carrier, who posted a warning on Facebook that mail bearing the recently issued Eid Greetings stamp will be “lost or destroyed.”

The threat came in response to a Facebook post by the Islamophobe Pamela Geller, who claimed that the stamp was issued “in the wake of” the Orlando mass shooting. The stamp was actually announced months ago, and issued the week before the massacre. (Eid stamps have been issued by the USPS since 2001, during the Bush Administration.)

The threat was posted on the Facebook page of “Catherine An Ray”. We haven’t been able to find such a person in the USPS employee database, and apparently neither has the USPS.

Update: Catherine An Ray’s Facebook was inaccessible for a while, but is now available once again. Here’s a link to the original threat, which appears to be unchanged. And, in case it’s disappeared again, here’s a screen grab of the item as it appeared on Thursday: 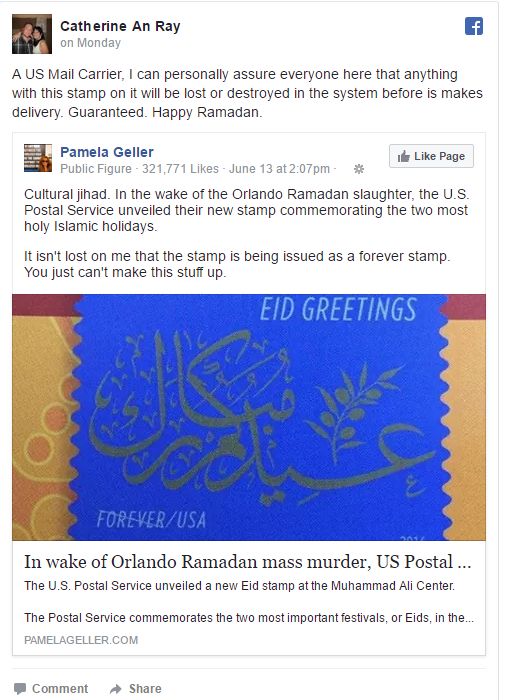 Raw Story has some additional “highlights” of Ray’s rantings on Facebook here.

The USPS now trying to determine if the woman is an actual employee.

“At this time we cannot confirm if the person involved in this matter is a postal employee, but we can assure you that the incident is being fully investigated and that the Postal Service will take whatever action is appropriate,” Toni DeLancey, a spokeswoman for the postal service, said.

Refusing to deliver mail would result in the employee being fired, she added, noting that the USPS prohibits discrimination and harassment in any form based on religion, race, creed, color, or national origin.

The delay or destruction of mail is also federal offense that can result in jail time.