NEWARK, NJ – In June 2014, Newark, NJ Postal employee Gregory Huff was an integral part of the team that coordinated a stamp unveiling at the Main Post Office in Newark for the newly released Harvey Milk stamp. While this was a notable accomplishment, Huff felt the need to do more.

“I wondered if there were any LGBT postal employee groups, and after some research I could not find an active group,” Huff said. “So I decided to start one. I wanted to create a group online for fellow LGBT employees. And events like what happened in Orlando underscore the importance of having such a group. There’s no reason why any LGBT postal employee should feel that they are alone during moments of terror (like Orlando) and victory (like the legalization of same sex marriage).”

Huff, a New Jersey native and long-time USPS employee, created the Lesbian Gay Bisexual Transgender U.S. Postal Employee Group (LGBTUSPEG), a Facebook group for all LGBT postal employees (and retirees) to confidentially network, get support, discuss news, find resources, read information about LGBT USPS policies, and learn about LGBT philately. The web address for this group is https://www/facebook.com/groups/93473519928052/, which employees can join using their own personal computers off the clock. The group is not officially endorsed by or affiliated with the Postal Service. “I’m just an employee who started a group for employees on my own time,” Huff said. 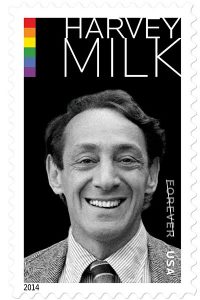 The historic release of the Harvey Milk stamp also inspired Huff in his current project. “After the Harvey Milk stamp came out, I began to wonder if there were any other LGBT people on U.S. stamps. I couldn’t find a resource that revealed who they were, so I made it my personal mission to painstakingly research every person ever featured on a U.S. postage stamp, to determine whether or not they were LGBT. I based it on the person’s personal admission or factual evidence from more than one source.”

After weeks of researching over 1,100 people, Gregory discovered that there were 72 LGBT persons featured on U.S. postage. That research is being compiled and turned into a book entitled, “LGBTQ on U. S. Stamps From 1847 – 2016.”

“This book will be free and available for download online this October, which is LGBT History Month,” Huff said. He plans to annually update and revise the book as new information and new stamps are released.