06/10/2016 – APWU President Mark Dimondstein addressed the Democratic National Committee (DNC) Platform Committee on June 9, where he gave an impassioned defense of the public Postal Service and urged the committee to adopt specific pro-postal and pro-worker planks.

The invitation to address the session on Jobs and the Economy was made at the request of Sen. Bernie Sanders’ campaign. The APWU is hoping to address the Republican National Committee (RNC) Platform Committee as well.

“The public Postal Service, run without tax dollars, is indeed a national treasure. Ecommerce makes it as crucial as ever,” Dimondstein told the panel.

“Yet its mission is being threatened by many corporate and Wall Street forces that seek to undermine it and privatize it. 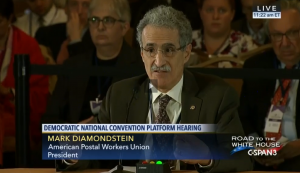 “The 2006 Postal Accountability Enhancement Act (the PAEA), with its outrageous burden of prefunding retiree health care 75 years into the future – something no other entity, public or private, has to do –  has led to degraded service, understaffing, closed post offices, slowed down mail, reduced hours of retail operations and driven away needed revenue.

Dimondstein called for the platform to endorse ending the “pre-funding” mandate that was passed by Congress in 2006; restoring overnight delivery of first class mail and periodicals within metropolitan areas and speeding up mail delivery overall; maintaining six-day and door-to-door delivery, and enhancing postal service by offering basic financial services and promoting “Vote by Mail,” as well as several other items.

“The Postal Service is vital to jobs and the economy, by providing service to individual and business customers and providing a foundation of decent unionized living-wage jobs, won through collective bargaining that lift-up our communities,” he said.

Collective bargaining is one way to reverse income inequality, which has been a central issue in the 2016 election, he noted. The platform should enthusiastically support unions, collective bargaining rights and promoting workers’ rights to organize unions free from company intimidation.

Dimondstein’s most spirited remarks before the DNC panel came in response to a question posed by committee member and businesswoman Bonnie Schaeffer, who said young people today barely use the mail and suggested there isn’t much need for the Postal Service in the age of the Internet. Clickhere to watch their exchange.