NEW YORK — Postmaster General Megan J. Brennan today helped the National Park Service celebrate its 100th anniversary with the dedication of the pane of 16 National Parks Forever stamps .The first-day-of-issue ceremony took place in New York City at the World Stamp Show-NY 2016– which is the world’s largest stamp show and is only held once a decade in the United States. 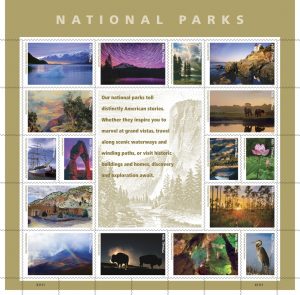 “The men and women of the National Park Service preserve public treasures that extend beyond the stunning vistas and habitat for wildlife that we associate with our National Parks.  They provide public places for recreation, they manage museums and historical estates, and they maintain our most famous monuments,” said Postmaster General Megan J. Brennan in dedicating the stamps. “The National Park Service exemplifies our collective desire to preserve our connection to the land, nature and our heritage, and to maintain what we find beautiful in our world for the benefit of future generations.  And the US Postal Service is honored to help celebrate the 100th anniversary of the National Park Service through the issuance of 16 stamps commemorating America’s National Park System.”

“This beautiful stamp series showcases the variety of national parks available for all to enjoy,” said National Park Service Deputy Director Peggy O’Dell who joined Brennan in the dedication ceremony. “From a small oasis in the nation’s capital to the wild splendor of Alaska, with beaches and historic sites and natural wonders in between, the stamps represent parks of all shapes and sizes. We hope the stamps encourage everyone to Find Your Park during the centennial.” 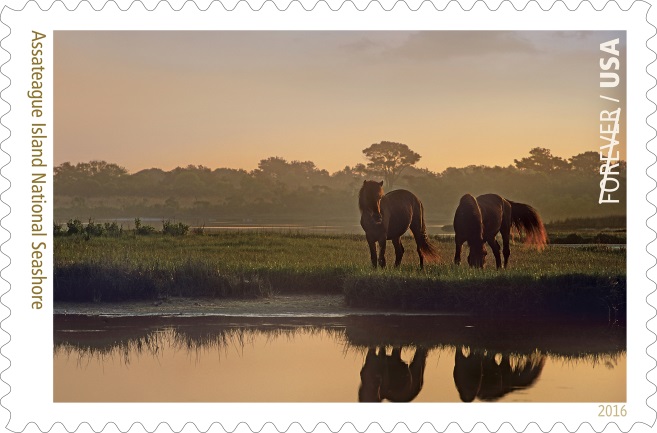 As part of the ceremony, a live satellite broadcast of the simultaneous special dedication ceremony taking place at Assateague Island National Seashore’s Barrier Island visitor’s center in Berlin, MD, was viewed by the crowd of 500 witnessing the New York City event.

“It’s a privilege to participate in this special dedication ceremony at the Assateague Island National Seashore, which is one of the most beautiful seashores with impressive beaches, dunes and even wild horses,” added U.S. Postal Service Chief Marketing and Sales Officer Jim Cochrane during the live satellite feed from Assateague. “Our National Parks are truly magnificent and we encourage everyone to visit.”

Assateague was one of 14 ceremonies taking place near National Park Services site locations depicted on the stamps. The public is asked to share the news on social media by using the hashtags #NPSStamps, #FindYourPark or #NPS100.

The National Parks Stamp Pane
This sheet includes 16 different stamps, all of them showing views of national parks or plants, animals, artwork, objects, and structures found in or associated with a national park. Small type on the margin of each stamp indicates its location.

The image at the center of the sheet is a detail of the 1-cent Yosemite stamp issued in 1934, rendered here in light brown.

Customers have 60 days to obtain the first-day-of-issue postmark by mail. They may purchase new stamps at their local Post Office, at The Postal Store website at usps.com⁄shop, or by calling 800-782-6724. They should affix the stamps to envelopes of their choice, address the envelopes to themselves or others, and place them in a larger envelope addressed to:

After applying the first-day-of-issue postmark, the Postal Service will return the envelopes through the mail. There is no charge for the postmark up to a quantity of 50. There is a 5-cent charge for each additional postmark over 50. All orders must be postmarked by Aug. 2, 2016.

The Postal Service also offers first-day covers for new stamp issues and Postal Service stationery items postmarked with the official first-day-of-issue cancellation. Each item has an individual catalog number and is offered in the quarterly USA Philatelic catalog, online atusps.com⁄shop, or by calling 800-782-6724. Customers may request a free catalog by calling 800-782-6724 or writing to:

When reproducing the stamp images for media use only, please provide the copyright sign (the “c” inside the circle) and 2016 USPS. No notice required for photographs by individual photographers; the National Park Service images all require the following notices: