From the American Philatelic Society:

NEW YORK CITY (June 2, 2016) — After more than 60 years, a missing stamp from the iconic Inverted Jenny sheet was returned today to the American Philatelic Research Library during a special ceremony at World Stamp Show–NY 2016 at the Jacob Javits Convention Center in New York City.

The stamp is one of a block of four stamps stolen at a 1955 American Philatelic Society show in Norfolk, VA. Keelin O’Neill of Ireland, who inherited the stamp from his grandfather, brought the stamp to an auction house in New York City in April to sell. The stamp was taken to the Philatelic Foundation in New York City, where it was discovered that the stamp was Position 76 of the missing McCoy Block. From April to today, a whirlwind of events transpired to provide for the return of the stamp today.

“Every stamp tells a story and the story of the Inverted Jenny now has a new chapter,” said Scott English, Administrator of the APRL, “This is a great day for philately and the result of a great partnership in the stamp collecting community and hard work of federal law enforcement.” 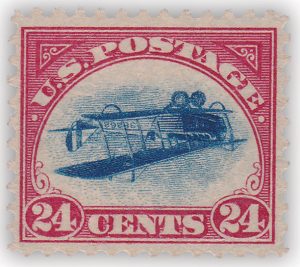 The claim to the stolen block was assigned to the APRL in 1979 by owner Ethel McCoy, a New York stamp collector, who loaned the block to stamp collecting organizations for public display. Two of the four stamps were recovered in the 1970s and 80s, but provided no information to the whereabouts of the remaining two stamps. In 2014, Donald Sundman, President of the Mystic Stamp Company, offered a $50,000 reward for each of the two missing stamps and the APRL offered a $10,000 reward for information leading to the recovery of either of the missing stamps. The offer of the reward is set to expire at the end of the World Stamp Show–NY 2016 on June 4, 2016.

“We are indebted to Don for his generosity and helping us resurrect one of the greatest unsolved mysteries in the stamp world,” said Roger Brody, President of the APRL, “On behalf of the Board and our members, I would also like to thank the committed agents of the FBI and the U.S. Attorney’s office for their quick response and assistance. Finally, we extend our thanks to Keelin O’Neill, who worked with law enforcement and the APRL to quickly return this stamp home.”

Aside from English, Brody, Sundman, and O’Neill, those participating in the ceremony were Preet Bharara, U.S. Attorney for the Southern District of New York; Diego Rodriguez, Assistant Director in Charge, New York Field Office Federal Bureau of Investigation; and Larry Lyons, of the Philatelic Foundation.

O’Neill will receive a $50,000 reward for returning the stamp to the APRL from Sundman and the Mystic Stamp Company. The whereabouts of the last stamp from an original block of four, identified as Position 66, remains unknown. It also is legally owned by the APRL.

English added, “While we are thrilled to have one more of our stamps back, there is still one more stamp missing and anyone with information about Position 66 should contact the APRL immediately.” Anyone with information can contact The American Philatelic Society at 814-933-3803, extension 246, or e-mail jenny@stamps.org.

The stamp was originally part of a sheet of 100 stamps printed in 1918. The Post Office Department hastily created the stamps as it instituted the nation’s first official airmail service. Since the stamps are bicolored — a blue plane inside a red frame on white paper — the stamps had be run through the press twice to create the stamp. It is thought that the inverted sheet was mistakenly placed on the press upside during the printing of one of the colors on the sheet.

The entire sheet of stamps was purchased by a lucky collector, William Robey, at a post office in Washington, D.C. The stamp was quickly sold to a dealer, then a collector, and over the next couple of decades was broken into singles and blocks, which were snapped up by collectors.

The missing Jenny was stolen from a national stamp show in 1955 in Norfolk, Virginia. It was part of a block of four owned by Ethel McCoy (1893–1980). McCoy was an active stamp collector and member of the American Philatelic Society. In 1979, McCoy willed the rights to the stolen stamps to the APRL, which is associated with the APS.

At some point, the block of stolen stamps was broken into singles, possibly by the thief or thieves, in hopes of disguising the individual stamps’ true origins. Also, all three recovered stamps have undergone alterations. The stamp that was just returned is missing much of its gum and some of its perforations were altered. Two of the four stolen stamps were located in 1979 and 1982 and returned then to the APRL, which sold one and kept the other.

Once the identity of the newly found stamp was confirmed, the APRL and Philatelic Foundation contacted the FBI and a case was opened with the Art Crimes Division in the New York office. The FBI put the stamp under protective order through the federal courts and remanded it for safe keeping with the Philatelic Foundation.

The final legal transfer of that stamp came via the cooperative effort of the APRL, the FBI, and U.S. Attorney’s Office via a signed agreement before the U.S. District Court, Southern District of New York.

The future of the rediscovered Inverted Jenny will be determined by the APRL Board of Trustees.

The ceremony at 3 p.m. June 2 appropriately took place next to a working version of the biplane that is featured on the stamp, a Curtiss JN-4 (nicknamed Jenny) aircraft, which served as trainers for World War I pilots and the Post Office Department’s first airmail carriers. The biplane at the WSS-NY 2016 international stamp show is a restored working version of the plane owned by the Old Rhinebeck (N.Y.) Aerodrome. It is at the show, courtesy of the aerodrome and Robert A. Siegel Auction Galleries.