The first-day-of-issue dedication ceremony for the Pluto—Explored! and Views of Our PlanetsForever stamps took place before a crowd of 500 at the world’s largest stamp show that only occurs in the United States once a decade, World Stamp Show-NY 2016. The show runs through Saturday. The public is asked to share the news on social media using the hashtags#PlutoExplored and #PlanetStamps. 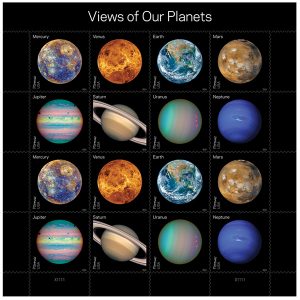 “In 1991, the Postal Service issued a Pluto: Not Yet Explored stamp that served as a rallying cry for those who very much wanted to explore it,” said U.S. Postal Service Chief Operating Officer and Executive Vice President David Williams in dedicating the stamps. “At the time, Pluto was still considered a planet, and it was the only one in our solar system that hadn’t been visited by a spacecraft.”

Pluto is now officially designated as a dwarf planet. The Postal Service is issuing the Pluto—Explored! Souvenir sheet as a companion to the Views of Our Planets stamp pane. 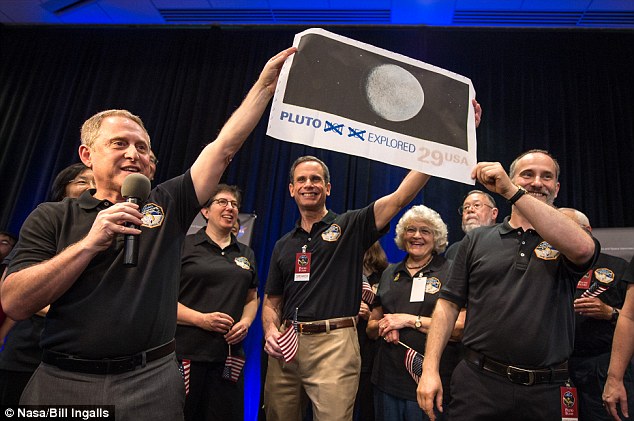 “In 2006,” Williams continued. “NASA placed a 29-cent Pluto: Not Yet Explored stamp on board the New Horizons spacecraft, which is safe to say, makes it the most widely-traveled stamp in the universe.”

The New Horizons spacecraft, launched into space on the fastest rocket ever built, traveled 3.26 billion miles at a speed exceeding 34,000 m.p.h. to reach Pluto on July 14, 2015. Placing that in perspective, it took three days for Apollo 11 to reach the moon. New Horizons passed the moon in nine hours.

The Postal Service learned of the 29-cent stamp’s journey aboard New Horizons on the eve of last July’s flyover and quickly put plans into place to set the record straight as noted in NASA’s celebratory photo.

“Now, the Views of Our Planets and Pluto—Explored! stamps will begin their own journeys today — on letters and packages to millions of homes and businesses throughout America,” added Williams. “We trust they’ll find a home in your own collections too.”

“These breathtaking new images of Pluto and our planets make for an exciting day for NASA and for all who love space exploration,” said Green. “With the 2015 Pluto flyby, we’ve completed the initial reconnaissance of the solar system, and we’re grateful to the U.S. Postal Service for commemorating this historic achievement.”

“The 1991 stamp that showed Pluto ‘not yet explored’ highlighted some important, unfinished business for NASA’s first exploration of the planets of our solar system,” said Dr. Alan Stern, principal investigator for the New Horizons mission. “I’m thrilled that 25 years later, these new stamps recognize that Pluto has indeed been explored by the New Horizons spacecraft and revealed to be a complex and fascinating world.” 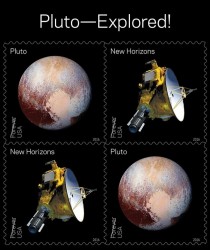 The Pluto—Explored! Forever stamps will only be available online at this linkat usps.com/shop or by calling 800-782-6724.

At the World Stamp Show — NY 2016, the U.S. Postal Service will hold an official stamp dedication almost every day of the show, to introduce a total of eight new stamp subjects.

Customers have 60 days to obtain the first-day-of-issue postmarks by mail. They may purchase new stamps at their local Post Office, at the Postal Store website at usps.com⁄shop or by calling 800-782-6724. They should affix the stamps to envelopes of their choice, address the envelopes to themselves or others and place them in a larger envelope addressed to:

After applying the first-day-of-issue postmark, the Postal Service will return the envelopes through the mail. There is no charge for the postmark up to a quantity of 50. There is a 5-cent charge for each additional postmark over 50. All orders must be postmarked by July 31, 2016.

The Postal Service also offers first-day covers for new stamp issues and Postal Service stationery items postmarked with the official first-day-of-issue cancellation. Each item has an individual catalog number and is offered in the quarterly USA Philatelic catalog, online atusps.com⁄shop or by calling 800-782-6724. Customers may request a free catalog by calling 800-782-6724 or writing to:

There are nine philatelic products for the Pluto—Explored! stamp issue:

There are nine philatelic products for the View of Our Planets stamp issue:

When reproducing the stamp images for media use only, please provide the copyright sign (the “c” inside the circle) and 2016 USPS.