This Exhibition sheet celebrates the New York FIP event which takes place May 28 through June 4 at the Javits Center in New York City. The sheet features the definitive size Hello stamp, as used in the Melbourne, Bangkok, Kuala Lumpur and London sheets and features images that represent the host city. 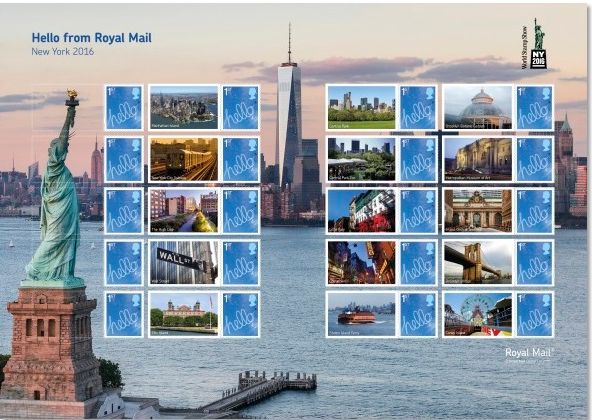 Manhattan Island Manhattan, one of the five boroughs of New York City, and is the heart of the Big Apple, featuring Times Square, Greenwich Village, Broadway and Central Park.

The High Line A rotting elevated railway track abandoned for 30 years was transformed into what is now a glorious garden park beautifying the concrete and brick blocks of Manhattan’s west side.

Wall Street New York’s financial district. The New York Stock Exchange is at No.11 Wall Street and at No.48 is the Museum of American Finance.

Ellis Island was the famous first port of call for immigrants to the USA. It is estimated that half of the country’s population today can trace their ancestry back to an immigrant who arrived via Ellis Island.

Central Park A true NYC icon for locals who stroll and socialise in its 843 acres. Top spots include the Strawberry Fields meditation garden in memory of John Lennon, assassinated nearby in 1980, and the Literary Walk, boasting statues of Robert Burns and Sir Walter Scott.

Little Italy This Manhattan quarter is a byword for colourful Italian culture, food and cool boutiques.

Staten Island Ferry The 25-minute trip to the island from Lower Manhattan offers one of the best views of the Statue of Liberty and New York Harbour.

Brooklyn Botanic Garden 10,000 plants flourish in themed gardens – cacti from Namibia to Bolivia grow in the Desert Pavilion and there are 350 small but perfectly formed trees in the Bonsai Museum.

Grand Central Terminal With its soaring arches, marble floors and zodiac-themed ceiling featuring 2,500 stars, this station is grand indeed. It has 44 platforms, 67 tracks – and its own tennis club.