In December 2014 the US Postal Service and the American Postal Workers Union settled a dispute about the use of supervisory employees to do the work of bargaining unit employees. The settlement resulted in a set of guidelines governing such work, and $56 million in compensation for APWU members for past violations. 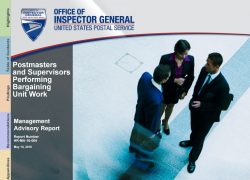 The USPS Office of Inspector General reviewed the postal service’s implementation of the agreement over the period from December 5, 2014 to September 30, 2015, the end of the postal service’s 2015 fiscal year. It found that the service had continued to improperly use managers to do bargaining unit work, paying out an additional $11.2 million in compensation to the employees who should have performed the work. In some cases employees were compensated for work that had actually been properly performed by managers under the settlement. One individual received $31,602 in payments. The Northern New England District accounted for almost one and a half million dollars of the payouts.

From the OIG’s summary:

On December 5, 2014, the U.S. Postal Service reached a settlement with the American Postal Workers Union (APWU) for $56 million, resolving a long-standing dispute dating back to the 1970s. This dispute involved the number of hours postmasters and supervisors could devote to bargaining unit work. Bargaining unit work is the work of career or non-career employees who are represented by a labor organization (union) that negotiates with the Postal Service for wages, hours, and other terms and conditions of employment. Prior to the settlement there were no established workhour limits.

What the OIG Found

The Postal Service did not effectively manage workhours for postmasters and supervisors performing bargaining unit work to ensure they complied with the agreement and controlled costs. Specifically, postmasters and supervisors exceeded the 15 workhours per week threshold by 829,484 hours from December 2014 through September 2015. As a result, the Postal Service made payments totaling about $11.2 million.

Our analysis of the payments showed that total payments made to the ten clerks who received the largest payment amounts ranged from $31,602 to $20,423, with the single largest individual payment being $23,899.

USPS management, in a rather testy reply to the OIG (“As noted in our exit conference, the Postal Service disagrees with the OIG’s assessment…”), claimed that it had already taken care of the problem. It did not explain how, if that was the case, it had incurred the additional $11.2 million in payouts. It also admitted that it had not issued “formalized guidelines” to field managers until October 2015, a full ten months after the settlement was agreed to.

Management’s initial efforts to brief and communicate with area management officials during the initial stages of the resolution was not effective in controlling payments. We identified numerous examples of postmasters or supervisors exceeding the requirements of the agreement during the audit and they continued to assume all payments were automatic, not realizing they could evaluate situations to determine whether there were emergencies or extenuating circumstances that could impact payments. Finally, we did not find evidence that Postal Service officials provided official training to the field until they launched the electronic web application for postmasters and supervisors to record their bargaining unit workhours in March 2015.

Despite that, the OIG says that management did eventually comply with the OIG recommendations, reducing the improper payments by 65% so far this fiscal year.