The 24th annual Letter Carriers’ Stamp Out Hunger® Food Drive is on Saturday, May 14. The food drive, sponsored by the National Association of Letter Carriers (NALC), is the world’s largest one-day food drive, taking place in more than 10,000 cities and towns in all 50 states, U.S. territories and the District of Columbia. 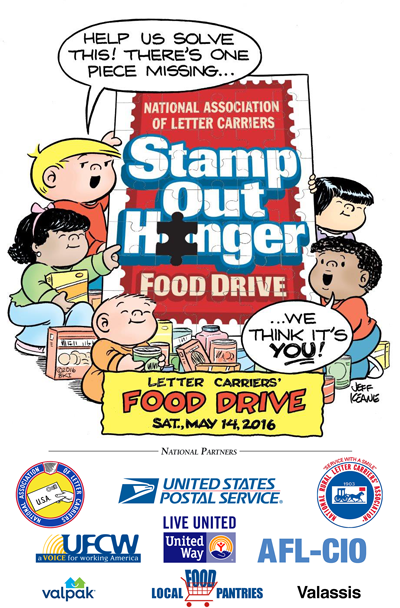 Participating in the food drive couldn’t be easier. Before their regular mail pick-up on Saturday, May 14, postal customers are asked to leave bags of non-perishable food items by their mailboxes. Letter carriers will pick up the bags and—with help from retired letter carriers, other postal employees and countless volunteers—deliver the bags to local food agencies.

Hunger affects about 50 million people around the country, including millions of children, senior citizens and veterans. Pantry shelves filled up through winter-holiday generosity often are bare by late spring. And, with most school meal programs suspended during summer months, millions of children must find alternate sources of nutrition.

Because the nation’s 175,000 letter carriers visit every address in the country at least six days a week, we see the struggles in the communities we serve, and we believe it’s important to do what we can to help.

In a new addition to this year’s food drive, letter carriers are teaming up in a few targeted areas with Amp Your Good to get healthy fresh fruits and vegetables to local food banks. Postal patrons living in San Francisco, parts of New York City and Greenwich, CT, can go to StampYourGood.com to donate fresh produce throughout the month of May.

To learn more about the Letter Carriers’ Stamp Out Hunger Food Drive, visitnalc.org/food and follow the drive on Facebook, Twitter and Instagram. And be sure to use the hashtag #StampOutHunger when talking about the food drive on social media.