WASHINGTON — A photograph of the Little Missouri River winding through the Badlands of North Dakota’s Theodore Roosevelt National Park was previewed today as the 15th of 16 Forever Stamp images to be revealed over a three-week period to celebrate the National Park Service’s 100th anniversary.

The photograph was taken in July 2013 by Q.T. Luong of San Jose, CA, who captured the image in the North Unit of Theodore Roosevelt National Park in the course of his 20-year project to photograph 59 national parks.

Theodore Roosevelt National Park, ND
According to the National Park Service, when Theodore Roosevelt came to Dakota Territory to hunt bison in 1883, he was a “skinny, young, spectacled New Yorker.” He could not have imagined how his adventure in this remote and unfamiliar place would forever alter the course of the nation. The rugged landscape and strenuous life he experienced here would help shape a conservation policy that we still benefit from today. 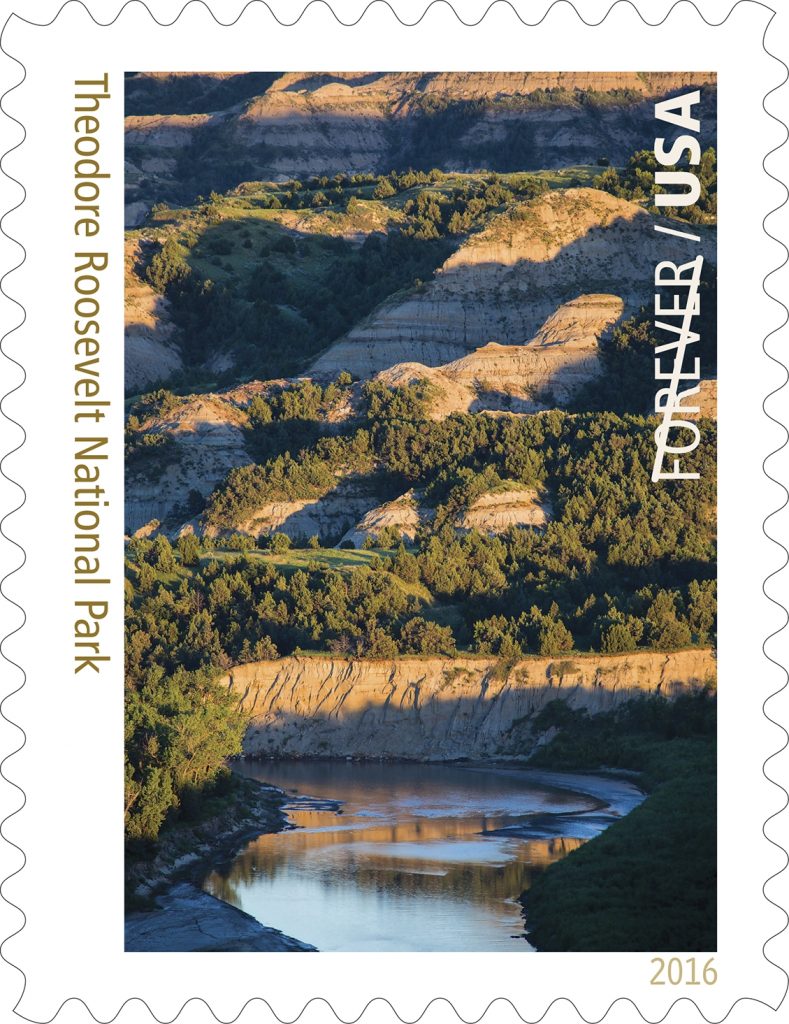 Theodore Roosevelt National Park contains several sites of historical significance, each relating to the era of cattle ranching in the late 1800s. Most significant is Theodore Roosevelt’s Elkhorn Ranch Site, the main ranch site where he spent the bulk of his time and where many of his conservation ideas grew. Roosevelt’s first ranch home, the Maltease Cross Cabin, is open for viewing at the South Unit Visitor Center.

The Long X Trail was used as a corridor to move cattle into the Northern Great Plains in the 1800s, and it passes through the North Unit of the park. Peaceful Valley Ranchwas built in the 1880s and served as a dude ranch from 1918 to the 1930s. The ranch and its owners assisted in the establishment of Theodore Roosevelt National Park. Visitors can still ride horses at Peaceful Valley by taking part in a trail ride with the park’s concessionaire. Visit this link for more information.

The Backstory of Luong’s Photograph
Luong was interested in the park’s rugged character and vegetation that set it apart from South Dakota’s Badlands National Park.

“The light of the late afternoon gleaming on the river appeared as a bright ribbon in the landscape,” recounted Luong, who used a telephoto lens to emphasize the section of the river with the reflection.

“The Little Missouri River provides a link between them, reminding me of the fond memories I cherish from the time I spent there.”

Born in Paris, France, Luong trained as a computer scientist. When he came to the United States for what was intended to be a short academic stay, he chose the University of California at Berkeley because of its proximity to Yosemite and his passion for rock-climbing — where he scaled El Capitan several times.

“Upon visiting Yosemite for the first time in 1993, it was love at first sight and it marked the start of my 20-year affair with the national parks. I decided to photograph all of them with a 5 by 7 large format camera, a single-handed, self-financed, monumental project which, as far as I know, had not been completed by anyone before.”

Luong settled in the San Francisco Bay area and started crisscrossing the nation to capture its diverse beauty. By 2002, he had visited 58 national parks. He subsequently left his scientific career to pursue his calling of working as a full-time photographer. In 2009, Ken Burns and Dayton Duncan featured him in the film “The National Parks: America’s Best Idea.”