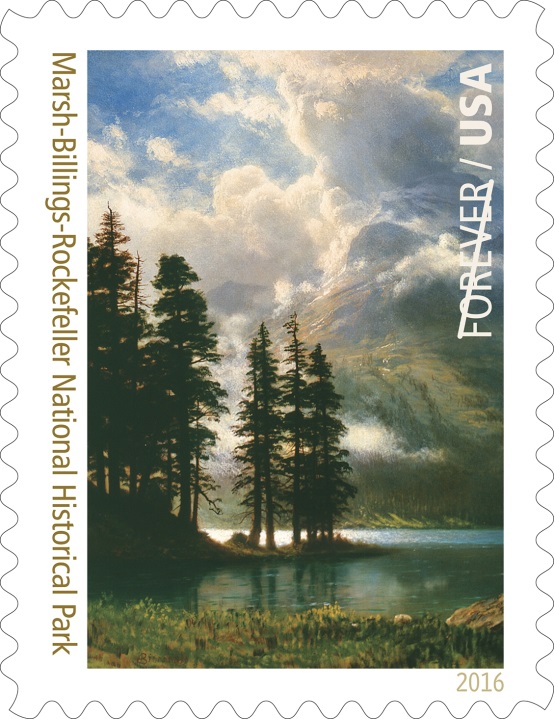 “This stamp exemplifies how our national park treasures extend beyond stunning vistas, wildlife, flora and fauna,” said Stephanie Toothman, Associate Director, Cultural Resources, Partnerships, and Science, National Park Service. “Albert Bierstadt’s painting represents the convergence of artistic, literary and political attention toward America’s scenic beauty in the 19th century, which helped establish conservation as a national value and laid the foundation for the first national parks a century ago.”

The stamp image is a detail of Bierstadt’s (1830–1902) 29-by-43-inch oil-on-canvas painting “Scenery in the Grand Tetons.” The permanent home of the painting is Laurance Rockefeller’s study in the Marsh-Billings-Rockefeller Mansion. The stamp image, available for media use only, requires the following credit: Scenery in the Grand Tetons [detail] Albert Bierstadt, Marsh-Billings-Rockefeller National Historical Park, MABI 2843

The Conservation Movement and the Marsh-Billings-Rockefeller National Historical Park(NHP)
The fine art collection at Marsh-Billings-Rockefeller National Historical Park is one of the gems of the National Park Service and includes 500 nature and landscape paintings, many by artists associated with the Hudson River School. The collection also includes folk art, modern art, portraits and sculpture.

According to the National Park Service, Rockefeller acquired the painting in the 1960s and added it to the collection of the Marsh-Billings-Rockefeller Mansion as “a reminder of his family’s long loyalty to Grand Teton National Park, and the preservation of the mountains, lake and valley in that spectacularly beautiful and dramatic part of the West.”

The Hudson River School Art Movement
During the 19th century, the artists of a young America searched for a new world view and found it in the very landscapes around them. Inspired by the stunning natural beauty from across the nation, the loose-knit Hudson River School of painters flourished from the mid-1830s to the mid-1870s and gave America its first major school of art.

According to the National Park Service, “Their landscapes sought to recreate the majesty of the natural world and to inspire admiration for its beauty.” Americans who bought their paintings and admired them on the walls of their city homes came to believe that those scenes should be preserved for future generations, not just painted or photographed.

At the same time, the works of authors such as Nathaniel Hawthorne, Henry David Thoreau and Ralph Waldo Emerson also celebrated the beauty and importance of nature.

The lives and contributions of these three generations of stewardship reflect the wide range of attitudes and ideas in the evolution of the conservation movement in the United States. The site was the boyhood home of G. P. Marsh, one of America’s first conservationists, whose 1864 book, Man and Nature, decried the effects of deforestation in Vermont and around the world and provided the intellectual underpinnings of the early conservation movement.

Later, it was the home of Billings, who returned to his native Vermont from California, transformed the property into a progressive farm and country estate, and reforested much of the land around the Mansion.  Its most recent owners, Billings’ granddaughter Mary Rockefeller and her husband Laurance Rockefeller, gave the property and its collections to the American people, the latest in a long history of support for National Parks by the Rockefeller family. Rockefeller received the Congressional Gold Medal in 1991 for his contributions to conservation and historic preservation.

The June 2 first-day-of-issue ceremony for the National Parks Forever Stamps pane will take place at New York City’s Javits Center at 11 a.m. as part of the world’s largest stamp show that takes place only once every decade in the United States — World Stamp Show-NY 2016. Dedication ceremonies will also take place at or near each of the National Parks depicted on the stamps. Individuals are asked to spread the news on social media by using the hashtags#NPSStamps, #FindYourPark or #NPS100.