WASHINGTON — A stunning photograph of the late afternoon sun shining into a heavy rain storm, forming rainbows over the crater at Haleakalā National Park, Maui, HI, is the 10th of 16 Forever Stamp images to be revealed over a three-week period to celebrate the National Park Service’s 100th anniversary.

Haleakalā National Park, HI
Haleakalā National Park vibrates with stories of ancient and modern Hawaiian culture and protects the bond between the land and its people. The park also cares for endangered species, some of which exist nowhere else. Come visit this special place — renew your spirit amid stark volcanic landscapes and sub-tropical rain forest with an unforgettable hike through the backcountry. Visit this link for more information.

The Story Behind the Photo 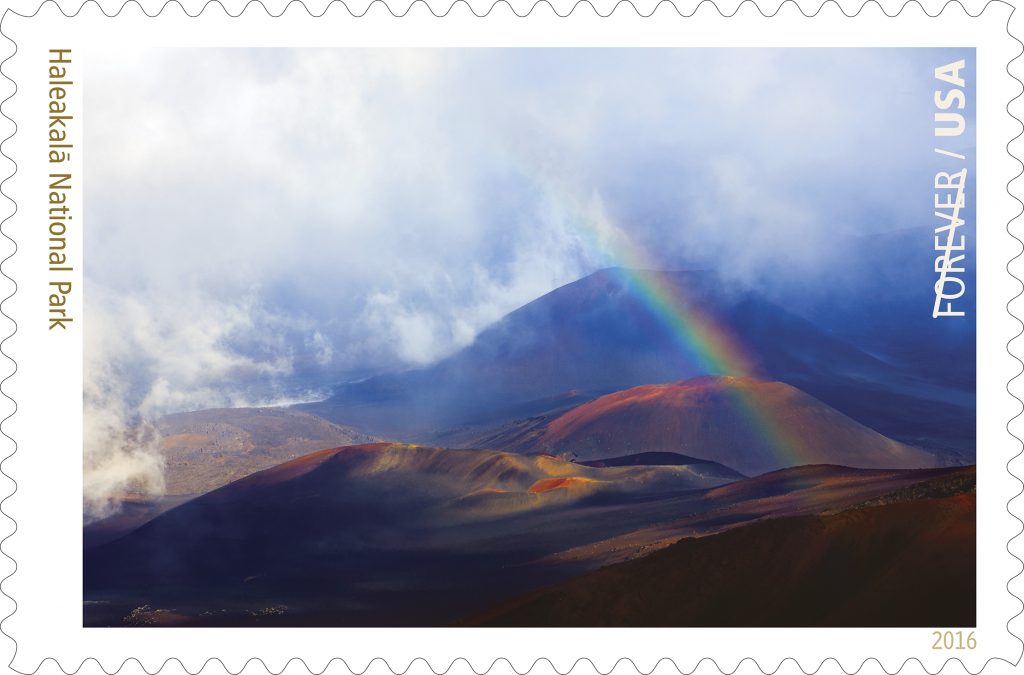 The photograph is the work of Kevin Ebi, who lives near Seattle, WA. Following is his narrative of capturing the image:

“When you think of Hawaii, you probably imagine continuous summer, warm water and hot beaches. But a couple hours after landing on Maui, I was in the freezing cold, pelted by hail, surrounded by thunderclouds. For a few minutes at a time, the sun would briefly break through it, using rainbows as spotlights to illuminate Haleakalā’s volcanic cinder cones.

Whether it’s because of the explosive growth of photography, or our need to take a break from our always-on, connected lives, our national parks are busier than ever. But for me, they can still be wondrous places of solitude. Such was the case that afternoon I spent chasing Haleakalā’s rainbows.

My day started as a scouting trip. Haleakalā is known for stunning sunrises. Getting that sunrise would require me to arrive at my shooting location while it was still dark. I decided to take a look at the crater during the day in order to determine where I wanted to be the next morning.

But the closer I got to Haleakalā’s summit, the less I could see. The fog got thicker and thicker. Then there was heavy rain. Then the rain turned to hail. I sprinted from the car into the visitor center, hoping to catch a bit of the view through the window. All I could make out was the railing of the viewing platform.

It quickly became clear that the storm wouldn’t stop. The few visitors in the center sprinted to their cars. I decided to stay put.

Then something amazing happened. The hail turned into a light drizzle. Sunlight poked through a tiny hole in the ominous cloud. And a rainbow dipped into the crater.

I managed to get a few shots before the sun slid back behind the storm clouds and the pelting hail resumed. It was a beautiful scene. Much of Haleakalā’s beauty comes from its rainbow-colored rocks. The rainbow in the sky complemented that nicely.

But I hoped for better placement of the rainbow. In those first images it was off to the side of the crater. I knew that as the sun moved across the sky, weather permitting, rainbows later in the day would land closer to a core group of cinder cones that I found especially attractive. And so I waited.

During the hour and a half I spent on the rim, the storm gave me just six opportunities to photograph rainbows. My favorite image — and the one that is used on the stamp — was taken during the next-to-last ‘window.’ It was also the briefest opportunity. I was able to shoot only a single frame before the rainbow vanished.

National parks take us into a different world, a world of jaw-dropping scenery and experiences that are dramatically different from our daily lives. This image of Haleakalā is both to me. And it’s why I’m so honored that it will help commemorate the 100th anniversary of the National Park Service.”