04/14/2016 – On April 5 and 6 the APWU completed the opening round of its case before the arbitration panel that will decide the terms of a new contract, with testimony supporting the union’s economic package and proposals to eliminate multiple tiers within the workforce.

The Postal Service began presenting its case the next day. Following the conclusion of management’s case, each side will present rebuttal testimony.  Before resting its case, the APWU reviewed the testimony and evidence presented. 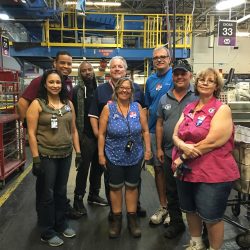 esentation, telling the arbitrators, “Postal workers earn the right to be justly compensated for our service and hard work… The economic lot of workers should be constantly improving, and those improvements should be passed on from generation to generation. We earn the right to be provided a safe workplace, free of harassment and discrimination, and, after concluding our careers, to enjoy a secure and dignified retirement.”

Days 2 and 3: Workers Testify
Nineteen career Clerk, Maintenance and Motor Vehicle Service Craft employees testified about their jobs. Several themes emerged:
•    Postal employees enjoy a tremendous degree of trust from the public.
•    They work independently, in many cases with minimal supervision.
•    Experience is crucial. It enables postal workers to make important decisions that impact service and protect postal revenue.
•    Postal work is hard work.
•    Employees take great pride in doing their jobs well and are dedicated to serving the people of the country.

Day 5: Compared to What?
Union experts demonstrated that APWU members’ wages are comparable to the wages of employees in large, unionized private-sector workforces. Jennifer Kelly, of the United Auto Workers union, dissected the detrimental effects multiple pay and benefit structures have had on employee morale in the auto industry and discussed significant strides the UAW made in eliminating them in their recent contract.

Day 6: Hardships and Indignities
Nine Postal Support Employees (PSEs) from all crafts offered emotional testimony about the devastating effect low wages have on every aspect of their lives.

Day 7: Survey Says!
Dr. Anna Haley-Lock and Melody Waring, of the University of Wisconsin, reviewed the results of a survey of PSEs and career employees in the first two steps of the pay scale. The survey revealed a systematic pattern of economic hardship and reliance on public benefits to make end meets, they reported. These conditions are reminiscent of the situation in the late 1960s – conditions that precipitated the Great Postal Strike of 1970, the union pointed out.

Retirees Department Director Judy Beard elaborated on the important role postal employment has played in advancing civil rights and in realizing “equal pay for equal work.” Career employment at the USPS has given women and minorities an opportunity to have dignified and meaningful careers that enable them to support their families, she testified.

Clerk Craft Director Burelson, Assistant Director Lamont Brooks, and Maintenance Craft Director Raymer testified that after ratification of the 2010 contract, the USPS failed to honor its commitment to return a specific number of career jobs to each craft. (MVS Craft Director Michael O. Foster previously testified on the same issue.)

USPS Proposals: Insulting and Outrageous
The arbitration panel should reject USPS attempts to use the 2010 contract as a base to demand additional concessions, the APWU asserted. That concessionary contract should be considered a temporary solution to temporary problems caused by the Postal Service’s congressionally-manufactured financial crisis and the 2008 economic meltdown.

“Not surprisingly, as management proceeds with their case, they are pleading poverty and trying to devalue the work APWU members perform. This is an attempt to justify their call for more concessions from the workers. The Postal Service’s demands, including a new, lower-tier career workforce, elimination of cost-of-living allowances, and weakening the no-layoff clause are insulting and outrageous.

“The arbitration panel should reject the Postal Service’s demands and grant the APWU’s proposals,” Dimondstein said.

Source: Union Wraps Up Opening Round In Contract Arbitration | APWU