BAXTER, Minn. — A postal worker is behind bars Wednesday after allegedly making terroristic threats at the Baxter Post Office Annex and for having a grenade with him while he was on his mail route. 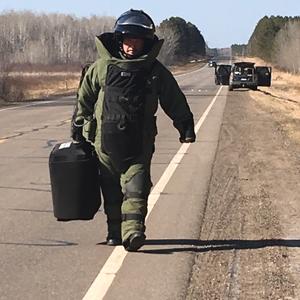 Baxter Police Chief Jim Exsted said police were informed shortly after 3 p.m. Wednesday of a male worker who made “some type of” terroristic threat at the Baxter Postal Annex that morning.

The postal worker was on his mail route south of Brainerd in his sports utility vehicle, when authorities located him, Exsted said.

Exsted said authorities investigated and learned the man did possess a grenade-type device in his SUV. The bomb squad worked on the grenade and learned it was a real inert military grenade, which means it lacked the explosive components to make it detonate.

The name of the postal worker was not released Wednesday.