WASHINGTON, Nov. 17, 2015 /PRNewswire-USNewswire/ — On the heels of the news that the U.S. Postal Service (USPS) posted a net loss of $5.1 billion for FY2015, a new survey of a representative panel of registered voters finds large bipartisan majorities recommend Congress should let USPS act more like a business in ways that would dramatically improve its financial position, according to the results of a Citizen Cabinet survey released today by Voice Of the People. Panelists made their recommendations after being briefed on the fiscal problems facing the USPS and hearing pro and con arguments on various options for the Postal Service proposed by the Postmaster General and under consideration in Congress. 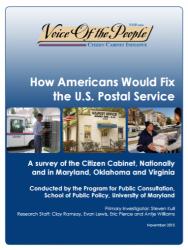 Most significantly, eight in ten panelists recommended dramatically reducing the requirement imposed by Congress to fully prefund future retiree health benefits – a requirement that has put USPS in the red for some years now. Overwhelming majorities found convincing the argument that ordinary businesses do not achieve such a high prefunding level and USPS should not have this unique requirement. However, majorities did not favor eliminating the requirement entirely, but rather lowering it by 20 percent and greatly extending the time allotted to provide funding.

“Both Republicans and Democrats seem comfortable with the idea of their neighborhood post office being more like a Kinko’s,” said VOP President and PPC Director Steven Kull.

The Citizen Cabinet panel consisted of 2,256 registered voters including samples of the nation as a whole and three states: Maryland,Oklahoma and Virginia. The survey was conducted by the Program for Public Consultation (PPC), School of Public Policy at theUniversity of Maryland and was fielded July 2 – August 12, 2015.

Unlike a standard poll, Citizen Cabinet surveys take respondents through an online process called a ‘policymaking simulation’ that gives respondents information and seeks to put them in the shoes of a policymaker. The simulation is vetted with Congressional staffers from both parties and other experts before it goes into the field.

Several other options for freeing up the postal service to act more like a business were considered:

“While Congress continues to have trouble finding common ground, a bipartisan majority of citizens is pointing the way to stability for the Postal Service,” Kull said.

However, some options were opposed:

The Citizen Cabinet panel was recruited from a probability-based sample of registered voters. A total of 1,582 panelists were recruited from Nielson Scarborough’s larger national panel; an additional 674 panelists were recruited by PPC by mail and telephone, using a random sample of households with registered voters provided by Survey Sampling International. Telephone and mailing were conducted by the research firm Communications for Research and additionally for Virginia by the Center for Survey Research at theUniversity of Virginia and for Oklahoma by the Public Opinion Learning Laboratory at the University of Oklahoma.

A report on the survey’s results, “How Americans Would Fix the U.S. Postal Service” can be found at: http://vop.org/wp-content/uploads/2015/11/USPS_Report.pdf

The survey’s questionnaire can be found at: http://vop.org/wp-content/uploads/2015/11/USPS_Quaire.pdf

All are invited to participate in the same survey completed by the panelists. It can be found here: http://vop.org/consultations/