NEW YORK — Shares of Staples Inc. and Office Depot Inc. both tumbled on Tuesday, hurt by renewed concerns that the Federal Trade Commission will block the companies’ merger plan. 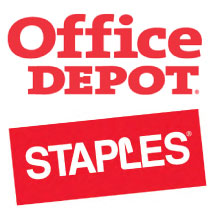 Deborah Feinstein, head of the FTC’s Bureau of Competition, is opposing the deal, according to a story in the New York Post, which cited an unidentified source. The FTC commissioners are expected to rule by October, though Staples, based in Framingham, Mass., could ask for the deadline to be extended, the Post said.