Update: The full text of Senator Carper’s bill is now available, and we have more details about how it would change postal workers’ and retirees’ health insurance coverage here.

The Senator who helped create the US Postal Service’s financial problems by co-authoring the disastrous 2006 PAEA law, is ready to offer yet another proposal to “fix” the USPS. 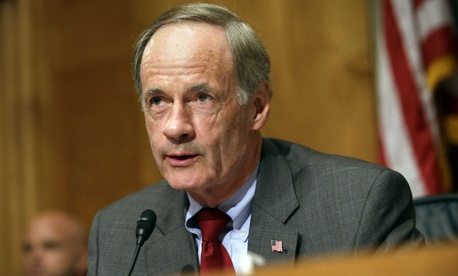 According to Government Executive, Senator Tom Carper’s latest bill would set up a separate postal service health benefit program (PSHBP) “within the Federal Employees Health Benefits Program and managed by the Office of Personnel Management”.  All postal workers and retirees would be required to enroll in a PSHBP plan. Medicare would become the primary coverage for eligible employees and annuitants.

The bill would also make the exigency rate increase permanent, and restrict the agency’s ability to close facilities and lower service standards. It would not require the USPS to continue Saturday mail delivery, but would encourage it to come up with new revenue sources.

Given the lack of interest in his earlier efforts, the Senator may have thought that his new bill would do better if it had a catchy title, so he named it “iPost”, which stands for the “Improving Postal Operations, Service and Transparency” Act. Ironically, iPost is also the name of a marketing company that relies on email exclusively…

Read more: EXCLUSIVE: Senator Introduces Bill in Yet Another Attempt to Save the U.S. Postal Service – Oversight – GovExec.com