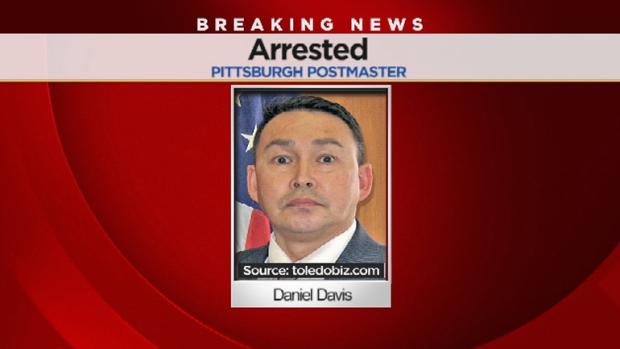 PITTSBURGH (KDKA) — The postmaster in Pittsburgh has been arrested on charges of opening mail packages allegedly looking for drugs and threatening employees if they told authorities about it.

According to the criminal complaint, Davis would run Google searches on the addresses on packages.

If an address came back invalid, he would open the package.

The criminal complaint reports that he claimed he was searching for drugs and money.

“He explained he was looking for drugs. He said where I come from we took drugs off the street,” Allegheny County District Attorney Stephen Zappala said.

Davis is also accused of telling co-workers who saw him opening the packages not to say anything, and, at times, the criminal complaint alleges, he threatened their lives.

The Toledo Blade (Davis was previously PM in Toledo) adds:

Daniel P. Davis, 50, of Canonsburg, was charged by the Allegheny County district attorney’s office with intimidation of witnesses or victims, criminal coercion and official oppression.

The charges relate to one of those employees, identified as Mavin Parker, the U.S. Postal Service’s manager of customer service in Pittsburgh.

Detectives wrote in an affidavit that Mr. Davis threatened several subordinates — telling one, Donna Clay, a customer service supervisor in the Hazelwood office, that he would kill her — who had become aware that he was opening express mail packages at locations throughout Allegheny County.

Only the East Liberty station is mentioned in the paperwork released today as the site where Mr. Davis allegedly opened packages in violation of postal service regulations.

Mr. Davis has been the subject of investigations by both the DA’s office and the federal Office of Inspector General. It was unclear early today whether Mr. Davis was in custody and whether there might be any federal charges pending.

And here’s more video coverage of the story from WTAE Pittsburgh: