Now that Labor Day is past, the stores will be rolling out the Christmas decorations, and right wing pundits will be wailing about the “War on Christmas”. The Daily Caller got a head start this year with a piece on that always handy target, the US Postal Service!

In a very long winded essay, the Daily Caller’s Richard Pollock (who must be paid by the word) vents his faux outrage against the USPS:

Don’t expect new Christmas stamps this year because for the first time in decades the U.S. Postal Service won’t issue a new stamp depicting any Christian religious figure or symbol. No baby Jesus. No Mary. And none of the three wise men.

Those of other faiths will be disappointed, too.  There will be no printing of new stamps for the Jewish holiday of Chanukah, the African-American celebration of Kwanzaa or the Muslim Ramadan holiday of EID, the Daily Caller News Foundation has learned.

Pollock then catalogs the recent history of holiday Christmas stamps at great length, sometimes just making stuff up: “…it has been uneven during Obama’s tenure, with the Madonna or the Nativity scene appearing in only two of his last six years. The last Madonna stamp was in 2011.” This despite the fact that the USPS page Pollock uses as his source clearly shows a Madonna stamp in 2013, and religious Christmas stamps in every year of Obama’s presidency, not just “two of his last six”.

The claim that this is the first time “in decades” that the USPS hasn’t issued new religious stamps is a bit shaky too, since Pollock himself admits that the last time it happened was in 2005- barely one decade ago, during the presidency of that godless liberal, George W. Bush. 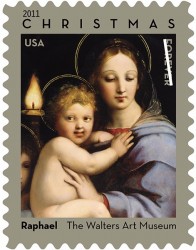 Pollock strays from his holiday Christmas theme elsewhere in the piece when he appears to be irritated by the stamp honoring the fiftieth anniversary of Martin Luther King’s March on Washington. He sniffs that “No conservative activists have been featured during Obama’s years in office.”

Pollock doesn’t specify which “conservative activist” he’d like to see on a stamp, but I’m guessing maybe James Earl Ray?

He also fails to mention that notwithstanding its “war”, the USPS will be very happy to sell you religious themed stamps on its web site, including the lovely Madonna pictured here, as well as Hanukkah, Kwanzaa and Eid stamps. Just scroll down past those godless Charlie Brown stamps! The fact that the USPS still has lots of religious stamps on hand suggests that maybe they aren’t as popular as Pollock thinks they should be? It apparently never occurred to him that the USPS might be issuing more religious stamps if they didn’t have so many of the old ones left over!

Source: Is The Postal Service Declaring War On Religion? | The Daily Caller