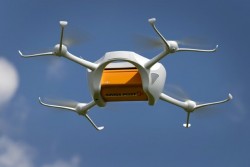 Swiss Post, Swiss WorldCargo and Matternet are jointly testing the commercial use of logistics drones. The three companies are investigating specific uses of drone technology and examining the cost-effectiveness of these business ideas. They will be carrying out drone tests in July 2015 for this purpose. The widespread use of drones is not expected within the next five years. The focus is primarily on their use in exceptional cases or the transport of special items.

In spring 2015, Swiss Post, Swiss WorldCargo (the air freight division of Swiss International Air Lines) and Matternet (a logistics drone manufacturer based in California) joined forces to test the practical use of drones in logistics. The possible areas of application offered by drone technology are very diverse, ranging from delivery to peripheral areas to the express delivery of goods. Until the time of their realistic commercial use in around five years, there are various requirements which need to be clarified. This includes the regulatory framework. In addition, there are technical restrictions with the drones of today, such as limited battery life.

Use in emergency situations conceivable

With these tests, the partners are pursuing the aim of playing a leading role in this significant development and pinpointing the technical possibilities and their own needs at an early stage. From today’s point of view, the use of drones in emergency situations is conceivable. This could, for example, involve bringing supplies to an area that has been cut off from the outside world following a storm. Another realistic possibility is the urgent transport of consignments with the highest priority, such as laboratory tests. Which specific uses will prevail depends on how quickly the regulatory requirements are clarified and technical obstacles dismantled.

Drone model to be initially used

The business partners will test several Matternet ONE vehicles. The flying device is specially designed for transporting small deliveries and it is extremely simple to operate. Matternet ONE will be used for the first time together with our partners as part of the tests. The drone has an extremely light construction and is capable of transporting loads of up to 1 kilogram over more than 10 kilometres with a single battery charge. Matternet ONE flies autonomously, following clearly defined, secure flight paths, which are drawn up by cloud software developed by Matternet.