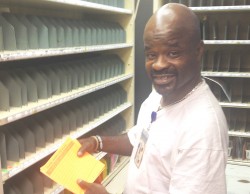 Florence, MS, Rural Carrier Charles Anderson recently stopped by a store after work and saw a woman running through a nearby field.

She looked upset and flustered, and Anderson soon realized why: The woman was trying to catch a small child who was chasing a dog headed toward a four-lane highway.

The woman wasn’t going to reach the youngster in time, so Anderson ran over to help. Just as the child got to the sidewalk alongside the highway, Anderson scooped him up — seconds before a large semi-truck roared by.

The dog also avoided the vehicle. The local police department later thanked Anderson for his quick thinking — and his fast feet.