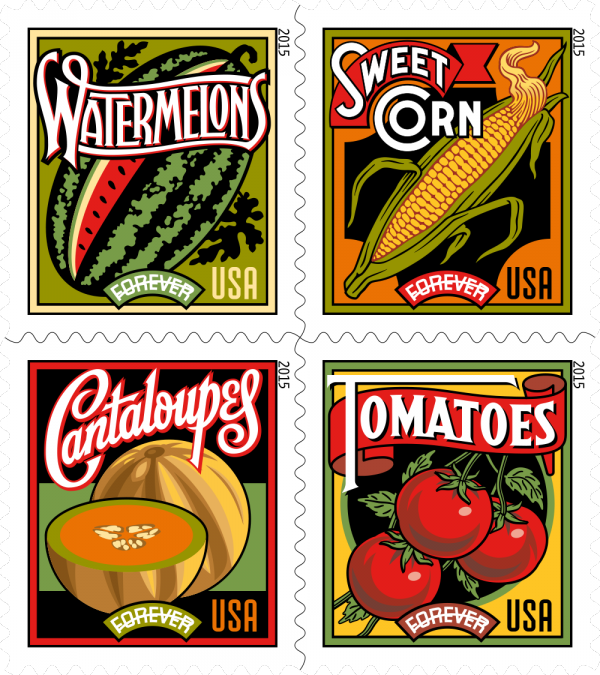 Every summer, some of America’s favorite foods are in season. The U.S. Postal Service® celebrates a few of those favorites—corn, tomatoes, cantaloupes, and watermelons—with four new stamps. Vintage produce advertising, including 19th- and early 20th-century crate labels, seed packets, and catalogs, inspired these stamp designs. Though not all produce was shipped in wooden crates, the stamp art is especially reminiscent of vintage crate labels.

The four stylized labels are drawn in the same color palette of red, black, green, and yellow-orange. The produce names are in white lettering at the tops of the four stamps. The word “Forever” is enclosed in a banner centered along the bottom of the stamp; the letters “USA” are to the right of the banner.

After America’s railroads linked the East and West Coasts in the 1870s, growers in agricultural areas could ship their products to locations across the country. To distinguish their wares from other producers, growers commissioned special crate labels from printing houses that employed some of the day’s best graphic artists. The artists created designs that featured clever slogans and unusual styles, though the art did not necessarily relate to the produce inside. Illustrations might portray bathing beauties, historic events, landscapes, animals, or the grower’s family.

Summer Harvest will be issued in a booklet format.