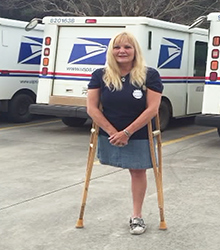 Since joining the Postal Service 14 years ago, Crestview, FL, Rural Carrier Anita Fee has come to the aid of several customers, including one whose home caught fire and a woman about to give birth.

But Fee’s daily acts of heroism inspire her co-workers most.

Fee’s right leg was amputated as a child. She walks with the aid of crutches, although this doesn’t slow her down.

“One of my best personal qualities is being able to overcome my handicap and work well with others — and not to ever give up,” she said.

Crestview Postmaster John Blair said Fee can “carry circles around most other carriers.” She cases, loads, delivers and collects mail with ease.

Blair also admires Fee’s ability to overcome personal tragedies, as well as her work with troubled youth in the community.

“She is truly the most amazing carrier that I have seen in my 30 years,” Blair said.

Fee told Northwest Florida Daily News she tries to set a good example for her grandchildren, including a grandson she raised after her son’s death.