Postal workers and their community allies were jubilant upon hearing of a national moratorium on mail processing plant closures.  Last Friday, the US Postal Service released an update on “network consolidation” which postponed the closure date of the Bend and Eugene/Springfield plants to a time “to be determined.” 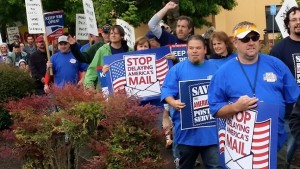 “Our pressure on the Postmaster General is working,” declared Jamie Partridge, a retired Portland postal worker.  “Growing resistance to the dismantling of the people’s postal service is bearing fruit.”

A series of recent actions have shaken postal management, according to Partridge.  At the urging of postal unions, retiree associations, rural organizations, and small business interests, the entire Oregon congressional delegation demanded a face-to-face meeting with upper USPS administrators about mail plant closures and mail delay.  That meeting took place on May 13th  in Washington, DC.  On May 14th , a national day of action to stop the delay of mail and keep plants open included activities in over fifty cities.  May 15th saw a march and rally of hundreds of postal supporters at the Eugene/Springfield plant.  On May 22nd, the USPS backed off its scheduled closures.

Nearly half – 141 — of the nation’s USPS mail processing and distribution centers were closed in 2012 – 2013 and another 30 closed in April of this year.  The Salem plant closed in May, 2013 and the Pendleton plant went down this April.  The Bend plant closed its parcel and large letter/ magazine sorting operation in April, while retaining regular letter sortation.  Approximately 50 more plants were set to close in July, including Eugene/Springfield, and almost all are now on hold.

Activists are demanding that closed plants be re-opened and that service standards be re-instated.  As of January 5th, the delivery of overnight, in-town first class mail has been eliminated nationwide.  Two-to-three day service has become three-to-five day service.  According to the USPS own data, even these new standards are only being met approximately 85% of the time (prior standards were being met 98%).

“These cuts cause hardships for customers – especially the elderly, disabled, rural, and small business customers– drive away business, and cause irreparable harm to the U. S. Postal Service,” said Rev. John Schwiebert, a leader of Portland Communities and Postal Workers United. He called the changes part of USPS management’s “flawed” strategy to sacrifice service without addressing the Postal Service’s manufactured debt crisis.

Postal management says these cuts and closures are necessary because the USPS is losing money.  Critics claim that a 2006 Congressional mandate, which forces the U.S. Postal Service to prefund retiree health benefits 75 years in advance, has created a phony financial crisis.  Although the USPS has claimed a “loss” every year since 2006, due primarily to the pre-fund mandate, the postal service has not made an actual payment toward prefunding since 2011.  The USPS has generated an operating profit for the last six quarters.

Portland Communities and Postal Workers United is dedicated to the preservation and expansion of the public postal service.