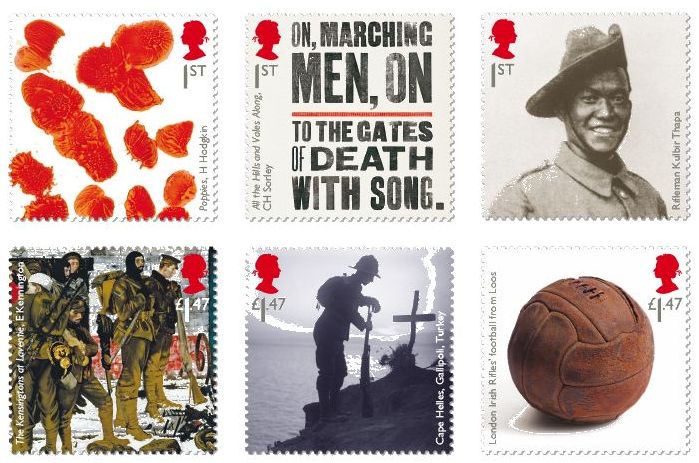 These themes combine to form a poignant collection which serves as a fitting way to commemorate the tragic conflict.

RIFLEMAN KULBIR THAPA
Rifleman Kulbir Thapa was serving in 2nd Battalion, 3rd Queen Alexandra’s Own Gurkha Rifles, when his unit attacked German lines on 25 September 1915, the first day of the Battle of Loos. Though wounded and separated from his battalion, he was able to reach the German front line. Finding an injured British soldier nearby, Kulbir stayed with him all day and night, before carrying him to safety the next morning. Despite his injuries, he then returned to the German trenches and rescued two fellow Gurkhas. For these selfless acts of heroism, Kulbir became the first Nepalese Gurkha to be awarded the Victoria Cross.

Joanna Lumley said; “In the First World War Gurkhas ended up far away from their homeland, men used to crisp mountain air found themselves stuck in muddy trenches in Flanders. But they faced everything with fortitude. So I am glad a Gurkha is being honoured on this stamp, just as our citizenship campaign recognised the loyalty and sacrifice Gurkhas have given and still give to Britain.”

LONDON IRISH RIFLES’ FOOTBALL FROM LOOS
On 25 September 1915, the first day of the Battle of Loos, this football was booted out of British trenches by Private Frank Edwards. Kicked across no man’s land by Edwards’ comrades in 1st Battalion, London Irish Rifles, it became entangled in German barbed wire as British soldiers overran the enemy position. Though disapproved of by his officers, Edwards’ action may well have offered a welcome distraction to men faced with a dangerous advance through heavy fire. Preserved in the London Irish Rifles’ Regimental Museum since the war, the football underwent special conservation treatment in 2011.

Captain Robert Denman, Second in Command of D Company, (London Irish Rifles) of the current day London Regiment said; “The story of the London Irish Rifles’ advance on the first day of the Battle of Loos is a poignant one that still resonates with all the men serving with the Regiment. The advance of the leading rifle company, through clouds of chlorine gas and facing intense machine gun fire while kicking a football, though militarily questionable, was a remarkable display of pluck and enterprise. We must remember that the battalion gained all their immediate objectives by occupying the German front line trenches within a few hours of the initial order to move forward.

“We also should remember that all the men involved were volunteers serving with the Territorial Force and I am personally really looking forward to following proudly in the footsteps of Riflemen Frank Edwards and his fellow London Irishmen when we visit Loos in September, 100 years to the very day that they took their first kick across ‘No Man’s Land’.”

POPPIES, HOWARD HODGKIN
In May 1915, Canadian military doctor Major John McCrae wrote a short poem entitled ‘In Flanders Fields’, which drew upon the image of delicate poppies and spoke with the voice of fallen soldiers, calling on their comrades to continue the struggle. The verses helped to turn the flower into a symbol of remembrance throughout the English-speaking world. Poppies, an abstract work by London-born artist Howard Hodgkin, was inspired by poppies from Normandy in France and was executed as a carborundum print. Hodgkin won the Turner Prize in 1985 and was knighted in 1992.

‘ALL THE HILLS AND VALES ALONG’, CHARLES HAMILTON SORLEY
In his four-stanza work ‘All the Hills and Vales Along’, Scottish poet Charles Hamilton Sorley depicts troops singing as they advance towards the front line. As the poem marches on, the pastoral imagery gives way to an ever-bleaker expectation of death. On 13 October 1915, 20-year-old Sorley was serving as a captain in the Suffolk Regiment when he was killed by a sniper. This poem was found in his kitbag and published posthumously. Sorley was later commemorated on a stone in Poets’ Corner at Westminster Abbey, dedicated to 16 leading First World War poets.

THE KENSINGTONS AT LAVENTIE, ERIC KENNINGTON
Painter and sculptor Eric Kennington joined the London Regiment in 1914, but was wounded and discharged in 1915. During his recovery, he worked on The Kensingtons at Laventie. Painted in reverse by applying oil paint to a sheet of glass, this extraordinary picture depicts Kennington (left background in a black balaclava) and several identifiable comrades resting in a ruined village after an exhausting spell in the trenches during the winter of 1914–15. A complex composition, the painting honours the fortitude and solidarity of ordinary soldiers.

CAPE HELLES, GALLIPOLI, TURKEY
In this image, British photographer Ernest Brooks captures a British soldier at a comrade’s grave at Cape Helles in an evocative sunset silhouette. Brooks was particularly keen on using silhouettes, as by rendering soldiers less recognisable, their outlines came to symbolise unknown soldiers. Cape Helles, on the southern tip of the Gallipoli peninsula, had witnessed bloody fighting on 25 April 1915, as a British division attempted to storm the beach in the face of determined Turkish resistance. Unveiled in 1924, the Helles Memorial commemorates 20,878 British dead of the Gallipoli campaign who have no known grave.

Andrew Hammond, Royal Mail, commented: “The second set in our First World War series tells a story of courage in a world of escalating violence and sacrifice. Once again the stamp images and words capture the significance and poignancy of the conflict.”

The stamps will be on sale from 14 May 2015 at www.royalmail.com/firstworldwar