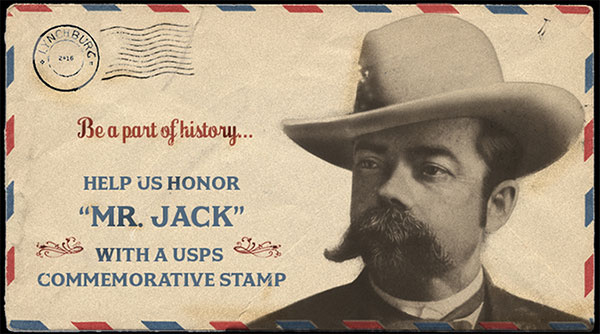 LYNCHBURG, Tenn. (March 13, 2015) — The Jack Daniel Distillery is asking its many friends to sign a new online petition in support of a United States Postal Service Commemorative Stamp in honor of Mr. Jack Daniel for the upcoming 150th Anniversary of America’s oldest registered distillery in 2016.

More than 30,000 friends have already answered the call and given their support at http://bit.ly/JDStamp in hopes of encouraging the Postal Service to honor the remarkable American with his own stamp. The famed distillery made its initial request for a commemorative stamp last September, and the Postal Service’s Citizens’ Stamp Advisory Committee currently has it under consideration. In addition to the petition, a recent Jack Daniel’s Facebook posting resulted in more than 140,000 “likes” in support of the effort.

“We believe that ‘Mr. Jack’ and his distillery, which has survived since the days of the Pony Express, have earned due consideration for a U.S. postage stamp, and we couldn’t be more thankful for the outpouring of support from our friends who clearly feel the same way”, said Jack Daniel’s Master Distiller Jeff Arnett. “It would be only fitting to seal Mr. Jack’s place in American history with a commemorative stamp to honor the 150th anniversary of his world famous distillery. We’re hoping our friends will continue to go online and join us in voicing their support for the man, his distillery and its unique place in American pop culture.”

Arnett emphasized that “Mr. Jack” and his distillery met the selection criteria for a commemorative stamp, including being an American, honoring those men and women who have made extraordinary contributions to American society and celebrating events of historical significance. In addition, the commemorative stamp has the support of the entire Tennessee congressional delegation, Arnett added.

Jack Daniel registered his distillery with the federal government in 1866, and 2016 will mark its 150th Anniversary as “America’s Oldest Registered Distillery.” The distillery is also on the National Register of Historic Places.

Last year, a record of nearly 270,000 people visited the distillery and Cave Spring Hollow in the small town of Lynchburg, Tennessee.