The US Postal Service has revealed the design of the new Maya Angelou forever stamp. From the USPS: 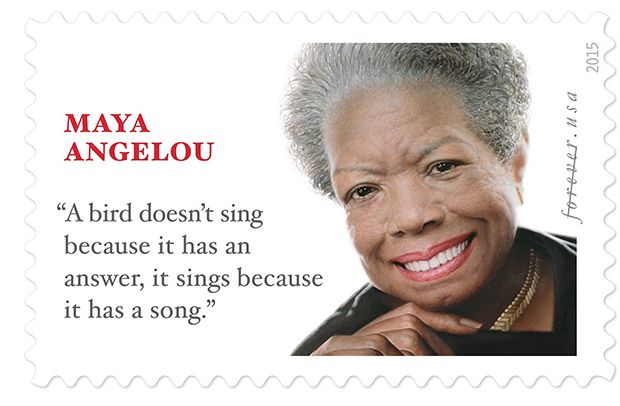 Author, poet, actress, and champion of civil rights Dr. Maya Angelou (1928-2014) was one of the most dynamic voices in all of 20th-century American literature. The book I Know Why the Caged Bird Sings, an autobiographical account of her childhood, gained wide acclaim for its vivid depiction of African-American life in the South.

The stamp showcases artist Ross Rossin’s 2013 portrait of Dr. Angelou. The oil-on-canvas painting is part of the Smithsonian National Portrait Gallery’s collection. In the bottom left corner is the following quotation by the pioneering author: “A bird doesn’t sing because it has an answer, it sings because it has a song.” Above the quotation is her name in red type. The words “Forever” and “USA” are along the right side.

The bright red-colored sheet also includes a short excerpt from Dr. Angelou’s book Letter to My Daughter. It reads: “Try to be a rainbow in someone’s cloud.”

The Maya Angelou stamp is being issued as a Forever® stamp in self-adhesive sheets of 12. Forever stamps are always equal in value to the current First-Class Mail® one-ounce price.