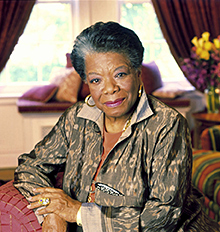 Maya Angelou — the beloved author, poet, actress and advocate for equality — will soon be honored with a stamp, the Postal Service announced Feb. 23.

“Maya Angelou inspired our nation through a life of advocacy and through her many contributions to the written and spoken word,” said PMG Megan Brennan. “Her wide-ranging achievements as a playwright, poet, memoirist, educator, and advocate for justice and equality enhanced our culture.”

Angelou’s works include “I Know Why the Caged Bird Sings,” a 1969 memoir about her early years.

She later became an American studies professor at Wake Forest University in North Carolina and read one of her poems, “On the Pulse of the Morning,” at President Clinton’s 1993 inauguration.

Angelou, who died last year, received multiple awards, including the Presidential Medal of Freedom in 2010.

USPS will preview the stamp and announce its release date later.