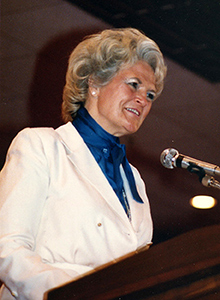 Jackie Strange, a 41-year postal employee and the first woman to serve as Deputy Postmaster General, died Feb. 1. She was 87.

Strange joined USPS as a temporary clerk in 1946, when the organization was still called the Post Office Department. She rose through the ranks and served as DPMG for two years before retiring in 1987.

“As I was promoted to positions, I worked really hard to identify other women who showed they had the capability of being managers,” Strange said in 2011.

As DPMG, Strange helped manage a workforce of about 800,000 and a budget of approximately $30 billion. She was the Postal Service’s highest-ranking woman until Megan Brennan became Postmaster General Feb. 2.
“Jackie’s courage, trusted leadership and innovation made a lasting impact on me and throughout the Postal Service,” said Brennan.

Strange’s funeral will be Feb. 12 in Durham, NC.
The National Postal Museum has more information about Strange, including audio interviews. In 2010, Strange published a memoir, “Ms. Deputy Postmaster General.”