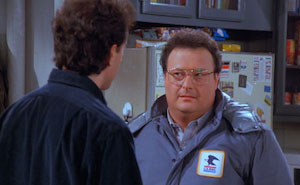 Wednesday, Feb. 4, is Thank a Mailman Day. Postal customers in the Midwest and East who have gotten their mail in the midst of a couple of blizzards might very well want to thank their mailman (or woman) on this day, but TBS is celebrating it in another way. On Feb. 4, the network will air a marathon of Seinfeld episodes focusing to some degree on one of television’s most memorable mail carriers: Jerry Seinfeld’s sworn enemy — the Lex Luthor to his Superman — Newman (Wayne Knight).

TBS will allow you to say, “Hello, Newman,” to the character during four Seinfeld episodes that show the mailman at his most scheming.