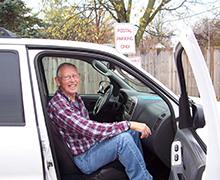 There’s a reason Postal Service employees are known as the eyes and ears of their communities. Just ask Fairland, IN, Letter Carrier Michael Short.

Short was recently leaving a home after delivering mail when he heard yelling. He stopped his vehicle and got out, expecting to see a customer who wanted to give him outgoing mail.

Instead, Short saw a man trapped under a minivan that had collapsed.

Short called 911, retrieved a carjack from his vehicle and raised the minivan. A police officer helped Short pull the man to safety.

Police credit Short with saving the man, who was trapped for more than two hours. The man — who suffered several cracked ribs and received more than 100 stitches to his face and jaw — is recovering.