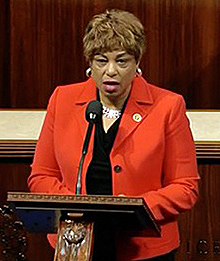 Many Postal Service retirees begin new careers after leaving USPS, and Brenda Lawrence is no different — although her new job is unique.

Lawrence took office this month as U.S. House of Representatives member from Michigan’s 14th Congressional District, which includes eastern Detroit. She retired from USPS in 2008 after 30 years, including serving as a letter carrier.

“I recall the pride and the sense of responsibility in delivering the U.S. Mail,” Lawrence said in a statement last week on the House floor.

“I want to take this moment to recognize and applaud the hardworking individuals who made this possible,” Lawrence said.