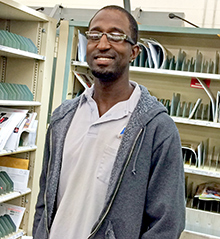 Tulsa, OK, Letter Carrier Jeremi O’Neal was delivering on his route when he came across a woman lying on her front porch.

As he got closer, he saw she was covered in blood from a broken nose and broken cheekbones. She was disoriented, but she was able to tell him she’d fallen the night before.

O’Neal called 911 and rushed to ask neighbors for a towel to stop the bleeding. O’Neal remained with her until emergency responders arrived. Then he finished his route.

The next day, the woman’s daughter-in-law met O’Neal at the door. “Thank goodness you were there, otherwise the outcome could have been much worse,” she said. Other neighbors thanked him as well.

O’Neal said, “I feel good knowing I was able to assist someone who was injured. I was in the right place at the right time.”