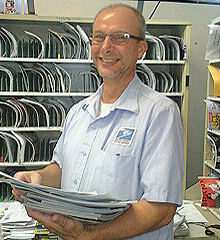 Akron, OH, Letter Carrier Michael Shell was delivering his route when he saw a man who had fallen in his garage. The man’s wife was trying to get him to his feet, but she wasn’t able to lift him up.

Shell immediately approached the couple and helped the man stand up, making sure he was stable before leaving.

The next day, the woman came into the Post Office to inform management of Shell’s heroic actions. She stated that if Shell hadn’t been there, she didn’t know what she would’ve done.

Shell received a letter from the PMG thanking him for his commitment to helping others.