From the Swanton Village (Vermont) Police: 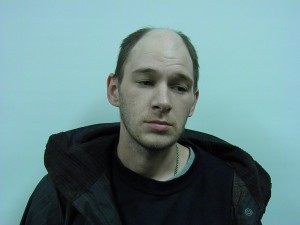 On December 9, 2014 at 4:51 p.m. the Swanton Village Police received a call to respond to the Swanton Post Office for a report of an Armed Robbery. The investigation showed that a lone male about 5’10” had entered the Swanton US Post Office dressed in dark color clothing wearing a mask and dark colored hooded coat or hoodie and gloves.

The male tossed a bag to the postal employee and demanded cash while brandishing a knife. The postal employee did not hand over any cash. The lone robber became agitated and became more threating towards the employee. On arrival Officers were advised that the suspect had left the scene on a dark colored mountain bike traveling east on Canada Street.

The lone robber was tracked to his residence by Agents of the US Border Patrol. The use of a K9 from the Vermont State Police also tracked the robber to his residence. The robber was identified as Matthew Greenan age 31 of Swanton. Greenan was taken into custody for an attempted armed robbery at the US Post Office in Swanton. It was also discovered during the investigation that Greenan had also passed a counterfeit $20.00 bill at Swanton Beverage Mart.

The Swanton Village Police were assisted by the US Border Patrol and the Vermont State Police.