A federal judge has issued a temporary restraining order blocking the sale of the Berkeley Post Office until a full hearing can be held on the City of Berkeley’s lawsuit against the USPS: 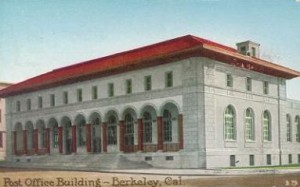 The city of Berkeley filed a lawsuit Wednesday against the United States Postal Service, alleging that it took steps toward selling the Berkeley Post Office before publicly evaluating historic impacts as required under both the National Historic Preservation Act and the National Environmental Policy Act.

The suit, filed in federal court, requests a temporary restraining order and preliminary injunction seeking to prevent the sale of the post office. U.S. District Court Judge William Alsup granted the restraining order Wednesday, preventing USPS and its employees from selling the post office until a hearing on the preliminary injunction is completed.

Berkeleyside yesterday revealed the identity of the developer who is in negotiations with the USPS to buy the historic building:

After weeks of silence, Berkeley developer Hudson McDonald has acknowledged that it is the company that is negotiating with the USPS to buy the main Berkeley Post Office at 2000 Allston Way.

If successful, Hudson McDonald, which is best known for the construction of the Trader Joe’s building on University and MKL Jr. Way, said it plans to restore the 1914 building and develop the back for retail operations while offering the Post Office the opportunity of continuing to use the front lobby for postal services.

“There is a lot to be determined,” Chris Hudson, co-principal with Evan McDonald of the developer, said Tuesday. “But we want to preserve and restore the building, including retrofitting it, and we are having a conversation with the post office about them being tenant in the front part.” Currently about 80% of the building is empty.

Hudson said the Post Office had received several offers for the building but that Hudson McDonald was the only bidder in negotiation with USPS.