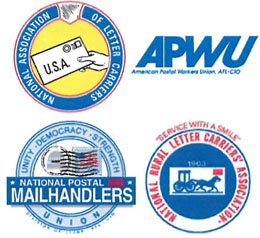 The four postal unions are calling for a National Day of Action on Nov. 14 to send a message to Postmaster General Patrick Donahoe and the USPS Board of Governors: Stop Delaying America’s Mail!

“The Postmaster General is poised to make devastating cuts in service to the American people – cuts so severe that they will forever damage the U.S. Postal Service,” the union presidents said.

“These cuts will cause hardships for customers, drive away business, cause irreparable harm to the U.S. Postal Service, and lead to massive schedule changes and reassignments for employees,” the presidents wrote.

“They are part of a flawed management strategy that has unnecessarily sacrificed service and failed to address the cause of the Postal Service’s manufactured financial crisis,” they said.

“The four postal unions are joining forces to protect service, fight for our livelihoods, and defend our great national treasure, the U.S. Postal Service. We have many allies in the fight against the proposed changes, including more than half the Senate and 160 U.S. Representatives,” the presidents wrote.

The unions selected the Nov. 14 date because it coincides with the USPS Board of Governors’ final public meeting of the year.

The union presidents are urging their members to work together in cities and towns across the country to organize rallies or press conferences in their areas.